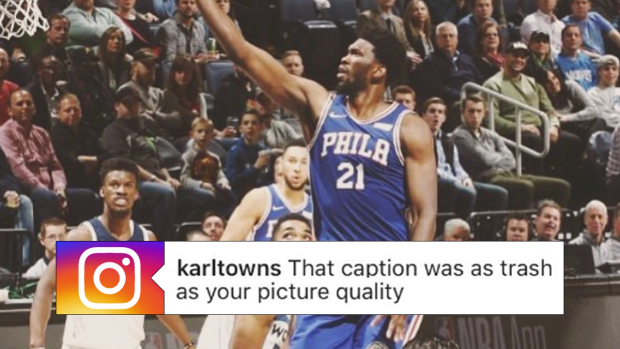 Joel Embiid is a master troll and he’s using his game on the court to back him up.

The 76ers were in Minnesota recently to take on Andrew Wiggins, Karl Anthony-Towns and the rest of the T-Wolves and Embiid had his way with the team. He put up 28 points, 12 rebounds and eight assists, leading the 76ers to a 118-112 win.

Then, a night after, he posted this on Instagram:

Caption: Euro stepping our way through Minnesota and we ended up raising the cat last night #TheProcess

Karl Anthony-Towns thought he would push back a little bit on the man that seems to be unbeatable on social media and he took an even bigger L than he did in the game. Anthony-Towns dropped in to tell Embiid that his caption was trash and Embiid clapped back.

Karl Anthony-Towns: That caption was as trash as your picture quality

Embiid is dunking on people online more than any player in NBA history, oh, and he’s pretty good on the court too.