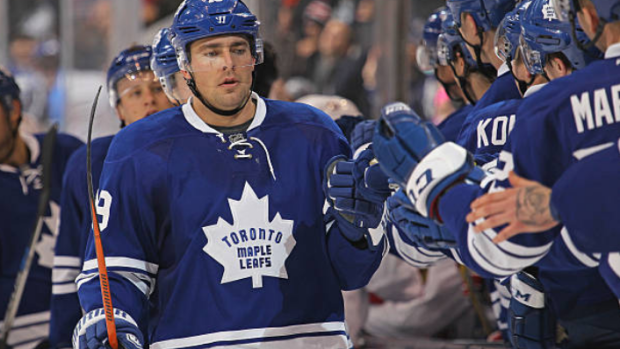 A year has passed since Joffrey Lupul quietly saw his official tenure with the Toronto Maple Leafs come to an end.

Lupul spent the final two seasons on the injured reserve and vanished from the team following sports hernia surgery in February of 2016. His final game came on February 6 against the Sens, his 701st game in the NHL.

Out of the fishbowl that is the Toronto sports scene, Lupul took to Instagram to voice his frustrations that he could've continued to play hockey, and felt that the team forced him to fail his medical. Lupul later deleted the post of him snowboarding which emphasized that he was healthy enough to play: “Haha failed physical? They cheat, everyone lets them”
He followed it up with an apology saying that “I hope one day to be able to get back on the ice.”

The former Duck, Flyer and Oiler now owns a restaurant in New York City and lives there as well as spending time in Newport Beach, California.

On Tuesday, a new episode of the Spittin' Chiclets episode was released with Lupul being the guest.

Joffrey Lupul joined the podcast this week for some all-time stories.

Here are some of the bigger takeaways from the episode, including the split with the Maple Leafs, playing in Toronto, his teammate Phil Kessel, Mike Babcock, and how he handled being told that he could no longer play the sport he loved.

Joffrey Lupul talking about his departure from the Maple Leafs on the latest @spittinchiclets pic.twitter.com/2mNH6DdH9q

On continuing to work out despite knowing that he could be doing more damage to his body than good.

“When that stuff gets in your head, you’re not going to be successful. I don’t hold a grudge."

"Phil’s great. He’s so awesome. Everyone loves him, except the media in Toronto hated him because he wouldn’t give them what he wanted. But that’s his personality. He wants to play hockey, and that’s it."

“He doesn’t necessarily want to work out; he wants to play ping pong. Can you blame a guy for that?”

On Mike Babcock, who was his coach at the beginning of his career in Anaheim and at the tail of it in Toronto.

“He’s a good coach. He’s a smart guy. He’s an extremely hard worker, noticeably more than other coaches I’ve had. Like, watching him in there doing video and practice plans. He’s a tough guy to play for. He’s demanding.

“My criticism with him, I feel sometimes even watching their team this year: He won’t necessarily jump on the grenade for the team sometimes. ‘My defence isn’t good enough.’ ‘My goalie didn’t stop the puck.’ Well, he’s one of the best goalies in the league. That’s the only criticism I have with him. This guy could easily bail some people out here and take some of the blame. He knows what he’s doing, and he’ll make adjustments too. He’s good that way.”