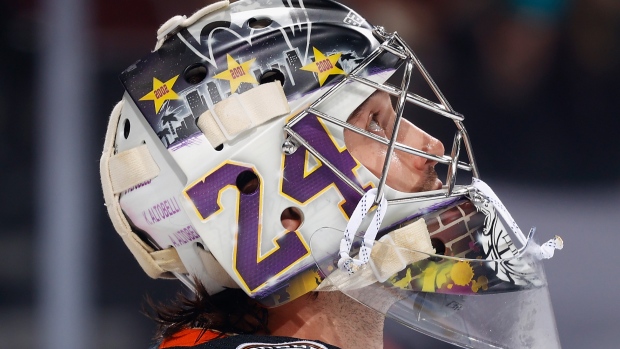 Last year, Anaheim Ducks goalie John Gibson unveiled a beautiful tribute mask in honour of Kobe and Gianna Bryant, and for Tuesday’s one-year anniversary of their death, he brought the mask back for the Ducks’ game against the Arizona Coyotes.

Touchingly, Gibson made 31 saves in a shutout win in his Kobe mask. The mask features Kobe's 8 and 24 jersey numbers on each side, as well as stars commemorating each of his championship years and the names of the seven other crash victims in addition to illustrations of Kobe and Gianna.

There were tributes to Kobe across the sports world on Tuesday, and it was definitely cool to see Gibson return an old favourite for the occasion.

Now we’d just like to see someone get these made for the ice.