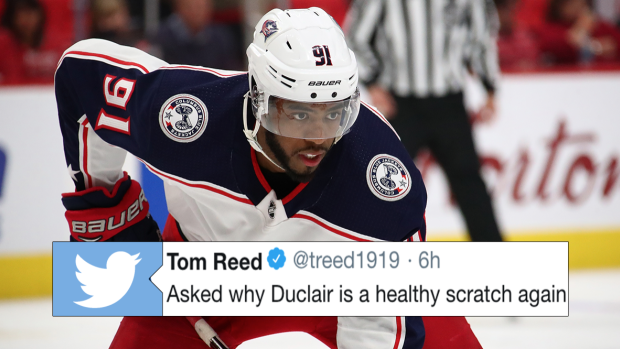 Anthony Duclair's first season with the Columbus Blue Jackets got off to a solid start, but lately things have been a little rough for the 23-year-old.

Asked about Torts’ “bad listening skills,” comment, Anthony Duclair said “I made a mistake in the neutral zone (on Saturday in Chicago) and I paid for it.”

Earlier this year, Duclair got just 24 seconds of ice time in a game against the Winnipeg Jets and Tortorella's reasoning for giving him less than a minute of ice time was this:

Anthony Duclair played one shift, 24 seconds. He couldn't get the puck out of the zone on the #NHLJets first goal and didn't play again.

"The meetings we had today about some of the things we needed to do, if you're not ready to play you're not going to play."#CBJ

Torts latest message seems to be similar to the one above, but in fewer words.  Despite all of the outside noise and soundbites from Torts, his team has won 5 of its last 6 games and sit in the 3rd place in the Metropolitan Division.