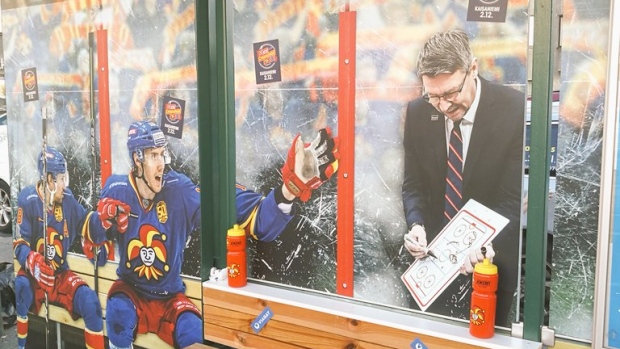 The KHL will feature its first ever regular season outdoor hockey game on December 2nd when Jokerit and SKA meet to honour the 10th anniversary of the league.

#Jokerit and @hcSKA_News will face off in an outdoor game on December 2nd in downtown Helsinki! A great day for hockey in store! #KHL pic.twitter.com/bYoTOoi1ot

On top of the KHL celebrating its 10-year birthday, Jokerit is saluting their 50th season, and 100th anniversary of Finnish hockey.

The location will be held by an inlet in Helsinki, Finland, where the birthplace of amateur hockey is said to have commenced. Finns played their so much that a rink was built in an area known as Kaisaniemi Park.

Marketing for the special game is well underway, and this ad was spotted in Helsinki.

Players bench outside at bus stop in Helsinki. Just like it will be when @jokerithc & @hcSKA play @khl outdoor game in #helsinki 2.12.2017 pic.twitter.com/rFkD5bA6I9

Whomever came up with the idea to have a bus stop bench attached to a mural of the Jokerit team taking instructions from their coach is a genius.

Former NHLers listed on the team’s roster include Nicklas Jensen, Matt Gilroy, Sami Lepisto, Peter Regin, Brian O’Neill and Kari Ramo. Eeli Tolvanen, who the Nashville Predators selected with the 29th overall pick in the 2017 NHL Entry Draft, is the team’s leading scorer with 12 goals and 10 assists in 21 games played.