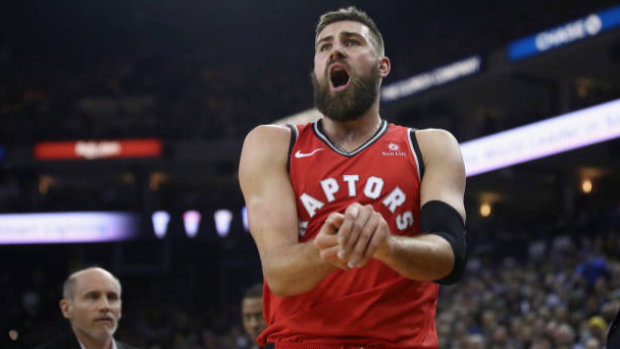 Raptors big man Jonas Valanciunas was forced to leave the marquee matchup between the Golden State Warriors and Raps with a dislocated thumb.

The injury occurred when Valanciunas posted up against Draymond Green. While dribbling with his right hand, Green attempted to swat the ball away from Valanciunas, catching JV's left thumb.

Valanciunas went down in a heap of pain, clutching his left hand before leaving to the Raptors' dressing room.

#JonasValanciunas will not return after his left thumb was dislocated after being hit by #DraymondGreen.

That was not easy to watch. JV is tough as nails, but could hear him screaming in pain from where we're seated at the top of the 100 level. He's gone to the locker room. Have to hope it's not as bad as it looked, but it looked real bad. He's got a history of hand injuries.

Have to feel for JV. He's having a really good season and has had strong stretches derailed by injury before. He's going to miss some time, which sucks for player and team, but this is where it helps to have a 3rd C like Greg Monroe. Capable and experienced big, should be ready.

I'm sure we'll also see more small-ball lineups with Siakam at the 5 (something Nurse has wanted to try more of anyway). Would also expect a Chris Boucher call-up. He's been dominant in the G League and has plenty of 2-way days left to burn.

The injury occurred in the second quarter of action.

Up until that point, the 26-year-old Lithuanian notched six points and seven rebounds in eight minutes of floor time.

In 2015, Valanciunas fractured a metacarpal bone in his left hand  and bruised the same hand in 2017.