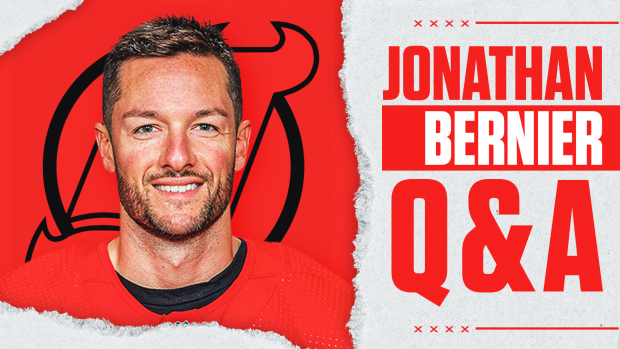 It’s safe to say Jonathan Bernier has had quite an NHL career.

The Laval native was drafted by the Kings in 2006, the team he would later win a Stanley Cup with in 2012. With a few teams in between, fast forward to 2021 where the Devils would land Bernier and sign him to a two-year, $8.25 million deal.

While the 11-year vet spent his last three seasons with the Red Wings, it’s hard to not to remember his time in a blue and white jersey...especially when you think of his friendly exchange with former Buffalo Sabres goaltender Ryan Miller.

Bernier recently spoke with BarDown's Raegan Subban to discuss joining the New Jersey Devils and to reminisce on his time in Toronto.

Raegan Subban: Thanks for joining us, Jonathan! How are you, how’s camp going?

We’re sure it’s probably just extra tough this year. How has the transition been from Detroit to New Jersey?

It’s been really good and easy. We've been here for quite some time now and obviously with free agency being delayed, it was kind of rushed for the kids with school and everything but once we figured that out, it's been pretty good.

I’m sure it’s not an easy process but that’s great that you’re finally all settled in and comfortable. What's the best thing about New Jersey so far?

The suburbs are great, it feels a little bit like Detroit. Like when people obviously think of Detroit they think of the downtown but once you get outside, it's great. It's kind of the same thing here where the rink is. It's probably not the best part but as soon as you get outside of that a little bit, it’s awesome! They have great schools, with just a great feel all around, and obviously you're close to the big city. We haven't really had much of a chance to go yet but it’s nice that we'll be able to enjoy it at some point.

It’s super nice that you guys get the best of both worlds living there, with the suburbs and New York City!

Correct. I’m not a downtown guy but I think where we're at right now is the perfect setup. You're not too far from downtown, but then you live far enough from it where it feels like you're in a nice neighbourhood.

Since you’re in a new city, what's one thing you want New Jersey fans to know about you going into the season?

To be honest, I'm not trying to do more than I can do. You know, I've learned with experience that when I play my own game and I feel good about it, it’s the same thing for my teammates. Obviously when you come onto a new team, you try and impress and earn the guys’ confidence but so far I've been trying to do my job and work hard everyday. I've had a pretty good camp so I'm just looking forward to the season and getting to know the guys better.

What are you defining as a successful season for the team this year?

I think just growing as a team. From what I've seen so far, we have a lot of skill. Obviously they signed Graves-y (Ryan Graves) And Dougie (Dougie Hamilton) to try to stabilize the defense a little but I think if we can play a good offensive and defensive game, we will be a pretty dangerous team. Like I said, from what I’ve noticed we’re very skilled, we can score goals so now, it’s just putting the work ethic into defense so we can play the same way.

Are there any new developments in your game that you've been working on for this season?

You know what, I've known my game for so long that I just kind of stick to it but Roggy (Dave Rogalski) has been really good at knowing what I need to get ready and you know, we've had a few things. Maybe be more on my feet instead of being in a reverse for too long. From his standpoint it was just to keep doing the same thing I've been doing and to just feel good about my game before the season starts.

Let’s transition a bit to the past. I know it's been a few teams since but I have to talk about your time on the Leafs. What was your favourite thing about playing on the team?

Obviously, it’s an original six, as well as a Canadian team so it was pretty special for me to play there. I had had a lot of good friends on and off the ice and I still do. So, I really enjoyed the city and the organization there.

What do you miss most about living in Toronto?

The city was just amazing. It has obviously grown a lot from when I played there, but still. My wife and I are big foodies so there was plenty to experience and we've made some really good friendships. I definitely miss seeing my friends outside of hockey there.

You get a pass for not remembering the name since it’s been a few years. I know this was also years ago, but I have to ask about the fight. If you could go back in time and change anything about fighting Ryan Miller, would you?

Obviously, what happened with Scott and Kessel shouldn't be in the league. So it's one of those moments when everyone steps in and helps each other out. I wouldn't change anything.