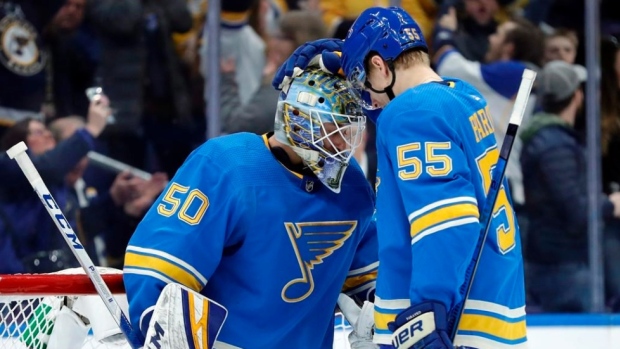 After a slow start to the season by the St. Louis Blues, they’ve been riding a hot streak as of late to climb back into a tight Central Division race, and much of that can be credited to the play of Jordan Binnington in goal. He’s been a minor miracle — and all since starting his first career game in January.

Another shutout for Jordan Binnington. @stlouisblues

For Binnington, a third-round pick in 2011 who has spent almost the entirety of his career in the AHL, it was probably unexpected that he would be given the starting reins over Jake Allen at any point in the season. From the sound of things, though, he isn’t the least bit shook.

After shutting out the Preds for his fifth shutout in just 20 games, Binnington offered this fantastic soundbite.

Reporter: A lot of close games lately. Were you nervous?

Binnington: Do I look nervous?

Want to add it was in good humor.

It isn’t hard to root for a guy who comes out of nowhere like Binnington has, and it has coincided with a strong turnaround from the Blues as a team. The hard part with a streak like this is sustaining over a longer period of time, but a good first step is to stay cool, calm and collected, Binnington seems to have a level head on his shoulders about it all.