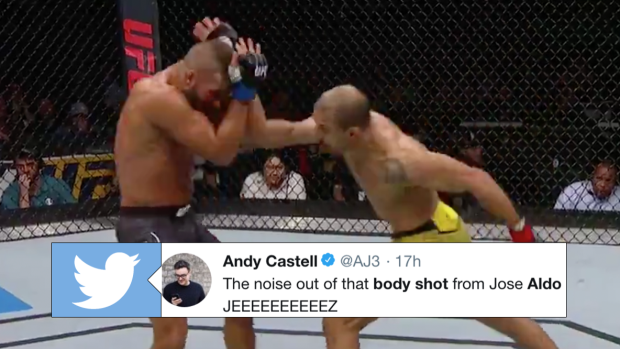 Jose Aldo was back in action Saturday night in Calgary for the first time since December of 2017 when he lost to Max Holloway for the second-straight fight by TKO.

Aldo was fighting for his first win since 2016 when he defeated Frankie Edgar by unanimous decision and he was in tough against Jeremy Stephens, but in the first round of their fight, Aldo hit Stephens with one of the most painful-sounding body shots you'll see that led to the finish.

WHAT. A. BODY SHOT. @josealdojunior gets the TKO win over Jeremy Stephens. pic.twitter.com/Gcg4H7fUJn

Just the sound of that body shot is enough to make us cringe and wince in pain every single time we watch it back.

THE BODY SHOT FROM HELL. Jose Aldo throws the meanest two-piece to the body since the dawn of time. Holy shit, that was bruuutal. I can breathe again, but Jeremy can't #UFCCalgary

What a beautiful body shot! The emotion from Aldo 💕#UFCalgary

That body shot hurt me just watching it. Great win for Aldo. #UFCCalgary

Aldo won the fight by TKO, his first win of that nature since 2013 when he defeated Chan Sung Jung at UFC 163.