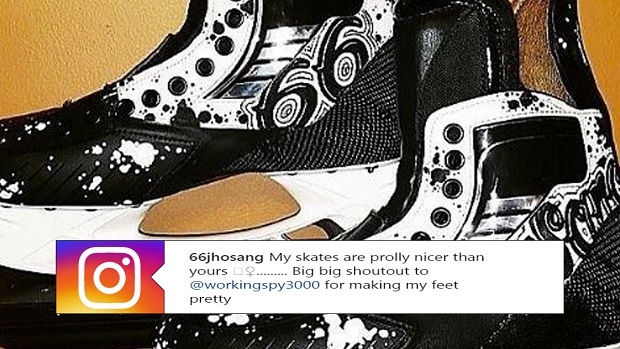 Josh Ho-Sang has faced a lot of criticism over the past few years. The Toronto, Ontario native was selected 28th overall by the New York Islanders in the 2014 NHL Entry Draft, but he didn’t end up making his NHL debut until last season with part of the reason being his attitude off the ice.

Last year, the 21-year-old sparked a minor controversy within the hockey community after he decided to wear No. 66 in the NHL as a way to honour Mario Lemieux.

His decision to wear No. 66 did not bug Mario Lemieux, so he decided to keep it as his NHL number.

This season, Ho-Sang will probably hear more criticism from fans across the league, this time for his custom skates he plans on rocking.

My skates are prolly nicer than yours 🤷‍♀️......... Big big shoutout to @workingspy3000 for making my feet pretty

The skate were designed by Instagram user workingspy3000 and feature Ho-Sang’s last name and his No. 66 on the skates.

New York #Islanders' Josh Ho-Sang will be rocking some custom skates this season. . Thoughts? . #Repost @66jhosang My skates are prolly nicer than yours.......Big big shoutout to @workingspy3000 for making my feet pretty

We don’t expect this trend to takeoff in the NHL, but it would pretty cool if players started coming up with custom skate jobs the way goalies do with their masks.