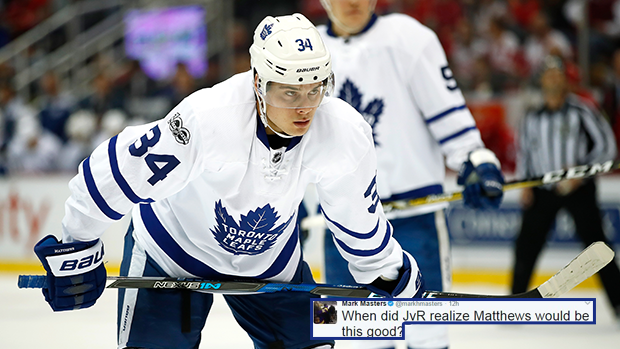 After breaking Wendel Clark's 31-year-old rookie goal scoring record last Tuesday, Matthews has continued to add to his tally, scoring three goals in two games, including two on Saturday night versus the Red Wings, bringing him to 38 on the season. So how long did it take Matthews's teammates to recognize that they were playing with a special talent? Not very long according to James van Riemsdyk.

When did JvR realize Matthews would be this good? "Probably the 1st game. (Laughs) Were you watching that one?" pic.twitter.com/xgfLWnHpAW

After scoring four goals in his first regular season game as a member of the Maple Leafs, Matthews set the bar pretty high out of the gates and has certainly (so far) met the lofty expectations placed upon on his shoulders. In what will be the Maple Leafs final game at the Joe Louis Arena in Detroit, Matthews continued to make his mark on the Leafs' record book, tying three records.

As fate would have it, Matthews will have the chance to break the Leafs' rookie points record (66) in the very place he was drafted last June, with Toronto travelling to Buffalo to take on the Sabres on Monday night.