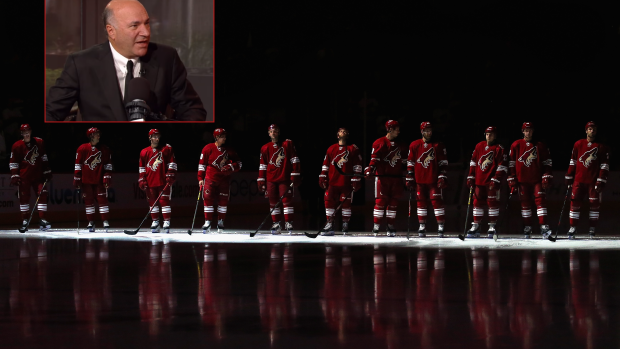 Back in March of this year, commissioner Gary Bettman said that the Arizona Coyotes cannot remain in Glendale, stating that the team has been kept in "financial and marketing limbo." The statement made by the commissioner was an attempt to kick-start legislation in Arizona in the hopes of helping the Coyotes to build a new arena.

The Coyotes current owner, Andrew Barroway, affirmed back in July that he does not plan on relocating the team. Relocating might not be in Barroway's plans, but they certainly were in Canadian businessman and television personality Kevin O'Leary's when he was interested in purchasing the team with an ownership group when it was up for sale a few years ago. Wednesday, O'Leary appeared on the Rich Eisen show to discuss sports and business when the topic of team ownership came up.

While discussing his fellow shark on 'Shark Tank,' Mark Cuban, O'Leary explained how the idea of owning a sports team doesn't really interest him all that much, as franchises tend to lose money year-after-year and don't offer a return on investment until they are sold. Although, O'Leary did say that there was a time in which he was interested in owning a stake in an NHL team and moving that team to Quebec City.

(Rich Eisen): Which deals did you look at?

(Kevin O'Leary): Moving the Phoenix team, the hockey team, out of Phoenix to Quebec City. That was really interesting, until (Bettman) shut it down. And I was willing to be part of that syndicate, it was a really interesting deal. I think...I don't know if I'm disclosing something out of school, but I think our purchase price was around 300 (million). And we went to the other owners and they said not a chance in hell. - (September 20th, 2017)

Obviously the deal never happened and the Coyotes are still in the desert, but it's interesting to think that the O'Leary could've assisted in bringing an NHL team back to Quebec City. In the meantime, hockey fans in Canada are just hoping that the Great White North doesn't lose another team.