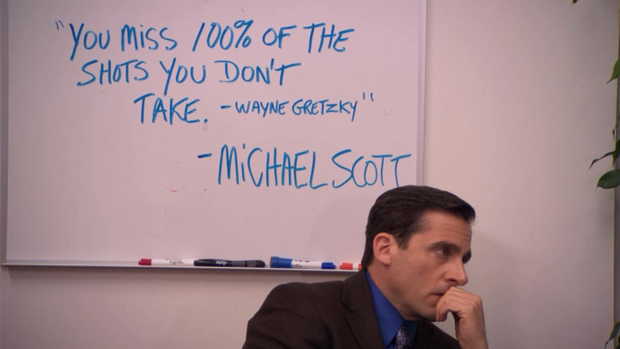 Wayne Gretzky is an absolute legend in the sport and one of the few athletes in the world that people can almost universally agree to be the greatest player of all time, so people are extra protective of his legacy. Despite all the records and other accomplishments in the NHL, one of the most popular things he ever did was tell Bob McKenzie “You miss 100% of the shots you don’t take” in 1983.

It even made its way into the office, where Michael Scott half-correctly attributed it to The Great One.

Today's #MotivationMonday is brought to you by the one and only Michael Scott...and Wayne Gretzky. pic.twitter.com/0YLAET09aG

Gretzky has in the past said that his father was the one to say the quote to him, but the first public time it was quoted was that Gretzky interview with Bob McKenzie.

Well, now, someone has totally failed to attribute Gretzky altogether.

New York Knicks star Kristaps Porzingis made the regrettable mistake of crediting Kobe Bryant for the quote, and now everyone on the internet (Especially the hockey crowd) is all over him with jokes and criticism.

"Kobe* says you miss 100 percent of the shots you don't take. Today, I missed all hundred."

-- Kristaps Porzingis on his 0 for 11 performance last night

Porzingis on the Knicks said, "you miss 100% of the shots you don't take" and quoted Kobe on it.... it's Wayne Gretzky bud @kporzee culture yourself

hate to #wellactually but.... Wayne Gretzky said it first, Kristaps. *crawls back into my hole* https://t.co/iSzqByvTv7

It seems like a honest mistake, but we’re sure nobody will make that mistake again.