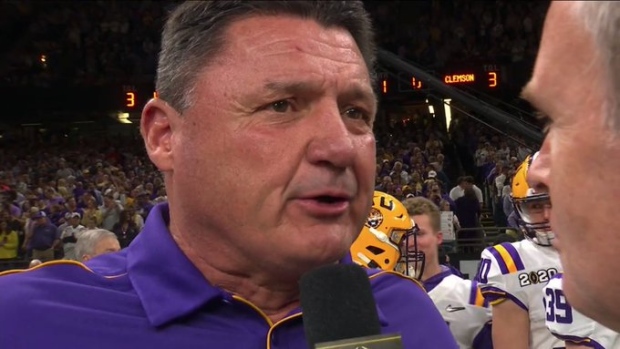 Ed Orgeron and the LSU Tigers aren’t playing around. This national championship game is serious business, and all of the blood, sweat, tears cliches that normally apply are very real here.

If you’re watching the game, you might have noticed a cut on Orgeron’s head, and as revealed on the broadcast, that cut actually comes from Orgeron himself, after he punched himself to get the team going for the game.

"The cut on Orgeron's head came from a punch he gave himself after a practice to get his guys fired up."

Here’s a high-res still where you can clearly see the cut, smack dab in the middle of Coach O’s forehead.

According to the broadcast, Ed Orgeron got that cut because he punched himself trying to hype up the players during practice. lmao pic.twitter.com/YD5UnJvkCW

Anyway, Clemson scored first to open the game, but Joe Burrow has LSU back on track with the score tied going into the second quarter. We’ll find out if Coach O busting his head open pays off.

LSU strikes back in the #NationalChampionship pic.twitter.com/GnfVTTXUKg