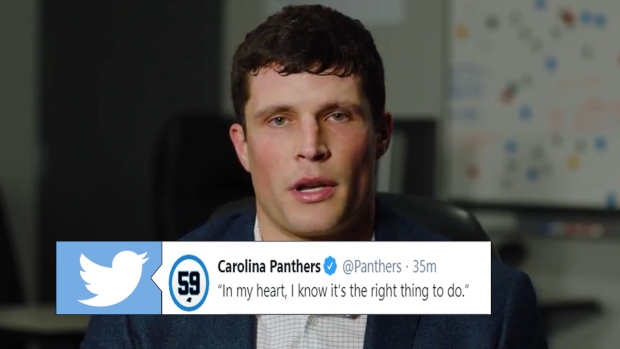 The Carolina Panthers selected Luke Kuechly with the 9th overall pick in the 2012 NFL Draft and it didn’t take the Cincinnati, Ohio native very long to become a fan favourite among the Panthers faithful.

However, the 28-year-old shocked Panthers fans and the entire NFL community by announcing his retirement on the team’s social media accounts.

“In my heart, I know it’s the right thing to do.” pic.twitter.com/mSDyJ0iEMw

Kuechly made it clear right off the top that his decision has nothing to do with the change in personnel and that it’s strictly based on his body and what he brings to the table on game day. Around the 1:42 mark of the video he started choking up a little bit as he explained why he’s calling it a career.

“For me, now is the right opportunity to move in a different direction and there’s only one way to play this game since I was a little kid, is to play fast and play physical and play strong, and at this point I don’t know if I’m able to do that anymore and that’s the part that is the most difficult…

I still want to play, but I don’t think it’s the right decision.

I thought about it for a long time and I think now is the opportunity for me to step away with...with what’s going on here.”

There will only be one 59 pic.twitter.com/jWv8w6TCo1