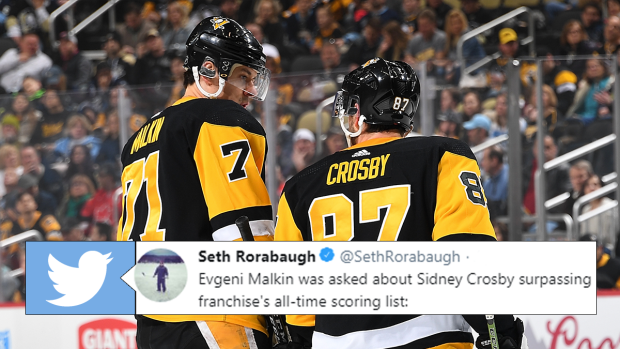 In both playoff and regular season scoring, Sidney Crosby and Malkin rank number one and two for active players on the points-per-game leaderboard. Malkin is over a point per game in both of them, he has three Stanley Cups, a Conn Smythe trophy, two Art Ross trophies, a Hart trophy and a Calder. There’s not much he hasn’t done, but it’s going to be tough for him to ever get his hands some franchise records.

That’s because playing at about the same pace at this point in their careers, Crosby has the lead. The latest milestone that Crosby hit was becoming the all-time leader in Penguins playoff points.

He's only 11 points back of Crosby (162 vs. 173), so if he can collect eleven more points on the Penguins current playoff run, he'll move to second place on another list.

Of course, the transcription of this probably takes out the tone in which he said it, and Malkin is always a pretty fun-loving guy, but we’re sure there is some truth to it. Malkin routinely gets overlooked when examining the legacy he will leave – just look back at when he was left off the NHL’s top 100 list.

Clearly he wasn’t very happy about that one either.