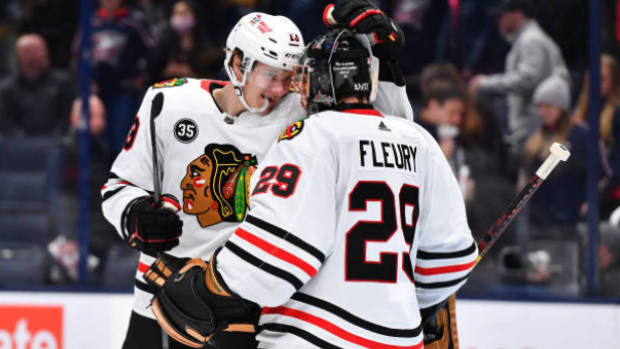 Marc-Andre Fleury is one of the most likeable NHL players there has ever been. Not only has he proven to be a dominant goalie, one that’s won three Stanley Cups and a Vezina Trophy, but his personality has always been just as elite as his play.

Ask anyone who has ever played with or against him, the smiley French Canadian is a pleasure to interact with.

On Tuesday, Marc-Andre Fleury was in the Chicago Blackhawks crease for their 4-2 victory over the Columbus Blue Jackets. Fleury stopped 24 of the 26 shots he faced, and was rightfully deserving of praise. Saying that, he likely didn’t expect this level of praise as he left the ice…

"Fleury I love you! You're the reason I'm a goalie" 🥺 pic.twitter.com/nhM7L4jv03

That’s pretty much the greatest thing you can hear as a goalie. While NHL players will always be appreciative of their fans, it’s another thing to hear that you were the reason for their decision to become a goalie.

Very cool moment to have captured, I'm sure it's not lost on Fleury either. 🌸#Blackhawks https://t.co/4vXG1wiivp

do you want to make me cry https://t.co/EIYBY7bvEz

Favorite player by far. Always has and always will be https://t.co/iIJPKxqCc8

I'M TOTALLY NOT CRYING
It's just dusty in here 🥺 https://t.co/ongtpaOYmI