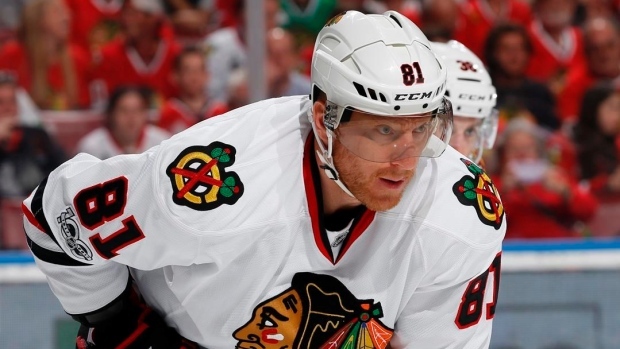 Former Chicago Blackhawks forward Marian Hossa saw his career come to an end after the 2016-17 season after being diagnosed with eczema and officially retiring in May of 2018.

Nine months after hanging up the skates for good, Hossa spoke about the physical hurdles he faced over his final few seasons while fighting the skin condition. Needing a drug named Cyclosporine to combat the condition, the former Slovakian required bi-weekly blood tests to make sure there were no harmful side-effects.

Hossa told Scott Powers of The Athletic that he didn't plan on retiring so prematurely when first diagnosed, but couldn't disregard what his body was telling him.

Marian Hossa hasn’t spoken much publicly about the skin condition that pushed him into retirement. Over a few days in Slovakia, he opened up about it, discussed the decision to step away, reflected on his hockey career & shared what his life is like now. https://t.co/ls3uVUiBjY

"I wasn't really thinking about the end, it just (came) basically, the eczema kind of told me," Hossa said to Powers in his homeland.

"My body told me there was no other way. That's when I had to start thinking, 'Well, it could be.' Because my skin (was) almost like breaking. (It was) leaking from the wounds. (I was) missing practices."

A combination of sweat and bacteria from his hockey equipment dating back to 2013 led to the former Ottawa Senator, Atlanta Thrasher, Pittsburgh Penguin and Detroit Red Wing being diagnosed. At first, the condition was controllable, but over time, blotches developed over his skin. Hossa knew he had to make a tough decision with the rest of his life in front of him.

"That's the one thing, I was still in great shape, I felt good. But I came home, I was afraid to touch my kids because (my) skin was not in a good shape," Hossa explained. "I said 'I'm not supposed to be like this. I'm not supposed to eat pills to play hockey.' Those pills are not easy pills. Those are hard pills. Every second week I have to go to (the) hospital to check my blood. If those pills don't affect me, something else (does).

“I said at what point should I be doing this to keep going? I have a life. I have a young family. I don’t want to risk it with another year with the pills on me. So I just came to the thing where I had to make a big decision and I have to be like, ‘Body says you have to stop.’”

In his final season with the Blackhawks, the now 40-year-old registered 46 points (26 goals, 20 assists) in 71 games. Questioned were asked on the seriousness of the condition considering his front-loaded contract paid him only $1 million in his final four seasons after signing a 12-year, $63,300,000 in July of 2009.

Aware of his doubters, Hossa passed a physical entering the 2017-18 campaign and understands why some may've raised their eyebrows when news broke that he wouldn't be playing hockey anymore that season.

“If you go over the issue, this would be the first thing about it, they’re checking,” Hossa said. “So, yeah, you cannot blame those people and fans of other teams. After later on, we knew maybe somebody would question this because it looks like this is how they want to write it down. But the good thing I had 20-something goals that year. I felt fresh. I would finish my career that way if I felt so good. I loved the game, I loved Chicago, I loved the fans and the organization. For me, that was tough - kind of like, ‘OK, I’m not going to play next year maybe.’

“But people look at it a different way. They didn’t understand because they didn’t see me every day. They didn’t know what I went through and these things. You cannot blame them.”

Chicago moved on from Hossa's contract when they traded him to Arizona in a package deal in July of 2018. The Coyotes currently have him listed on their long-term injured reserve for two more seasons.

This is a fantastic read on future Hall of Famer Marian Hossa. Kudos to @ByScottPowers for telling his story so well. https://t.co/bW2639YQvz