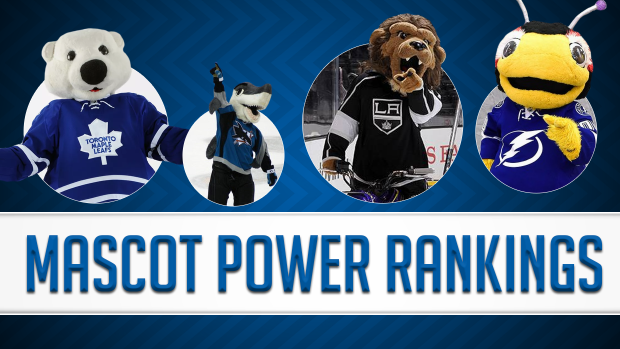 For hockey fans, it's the most wonderful time of the year because the NHL playoffs officially get started on Wednesday.

There's so much excitement in the air right now and what we want to do is capitalize on that excitement by talking mascots, or more specifically ranking mascots.

That's right hockey fans, BarDown Mascot Power Rankings are back and better than ever! At the end of every round, a new rankings list will be released, but the catch is it will only feature the mascots from the teams in the playoffs.

This week, we're going with the traditional top ten, but at the end of the first round, that number will be cut down to eight as there will only be eight mascots left in the playoffs.

Like always, the "special sauce" or "secret formula" for the rankings can't be revealed to the public.  All you need to know is the first edition of the rankings is based on what mascots we think are the best in the arena, outside of the arena and on social media.  Enjoy!

Iceburgh is jumping for joy - and you could be too!

Stop by @PensGear at PPG Paints Arena between 5:30-6:30PM on Tuesday, February 27 to get a photo with our friend Iceburgh! pic.twitter.com/2wNtjh6zBQ

Penguins are adorable, but a lack of social media presence hurts IceBurgh.

Just like the Wild, Nordy might actually be underrated in these rankings.  Keep an eye on the Wild's mascot if the team can make a deep run.

I just finished filling out my #StanleyCup bracket. What do you think? It looks good to me. #mnwild pic.twitter.com/3RiCS9jWM4

Leafs fans are going to be upset by Carlton's positioning on the rankings, but then again they'd some of them would probably find a way to be upset if Carlton was first, too.

Got to have my go at Fastest Skater during this year's @NHLJets Skills Competition!

Gave it my all but @blemieux22 took the W. pic.twitter.com/2CMbgMSo5M

Mick E. Moose could use that blazing speed to move up in the rankings quickly.  The potential is there on and off the ice.

Spent the morning visiting a bunch of the media and hooking them up with some #WPGWhiteout swag!

Thanks for hangin' all! pic.twitter.com/L9HUkirRxM

It's a run on heavy hitters and it starts with SJ Sharkie.  San Jose's mascot is the friendliest shark we've ever seen and takes the best pictures with fans.

Spoiler alert, if the Capitals make it past the second round, Slapshot's stock is going all the way up.

New Jersey's mascot is the best in the East heading into the first round of the playoffs and this tweet below perfectly displays why that is.

If you cant You dont
handle me deserve me
at my at my pic.twitter.com/8wpNqJWK07

Plus, we're suckers for mascots that like wrestling, so Chance is going to be tough to beat.

When it comes to chirping on Twitter and messing with opposing fans, nobody does it better than Bailey.

I found a helmet for my baby non flying bird and it looks amazing!!! What do you think @penguins fans? I bet a certain team in Florida would like it right @Jaguars ? #PITvsLAK @NHLonNBCSports pic.twitter.com/kWbCpc8YTP

Should this concern me?! 🙀 pic.twitter.com/SqPJanZZQM

As the old saying goes, get you a mascot that does it all, and Gnash does it all.