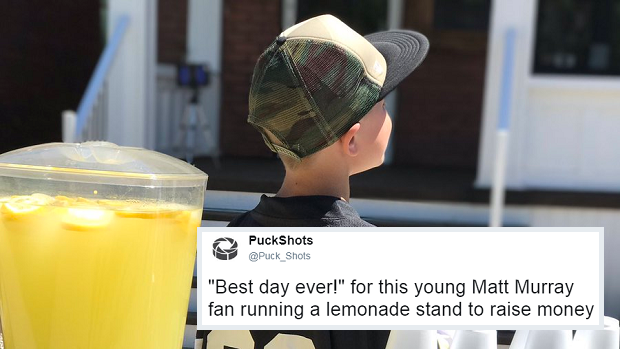 Matt Murray may have had the best two years of anybody in sports. In his first two seasons in the NHL, he stole a starting job, won two Stanley Cups and was nominated for the Calder trophy.

Obviously that means he’s attracted a lot of fans in that time, and now he’s giving back to some of them.

Murray had a young fan who, in an effort to raise money for the Humane Society, started a lemonade stand in Thunder Bay. He was rocking his Murray jersey and just hoping to do what he can for the day, but then a special guest showed up bearing gifts.

"Best day ever!" for this young Matt Murray fan running a lemonade stand to raise money for the Humane Society when guess who showed up!👀 pic.twitter.com/KsbrvhqSNu

Not only did he leave with a new photo with one of his idols, but he received a signed stick to go along with it. The message on the stick reads:

“To Gavin, Keep being you! Your Friend… Matt Murray”

We’re sure this is a moment this kid will never forget. Hopefully Matt bought some lemonade while he was there too.