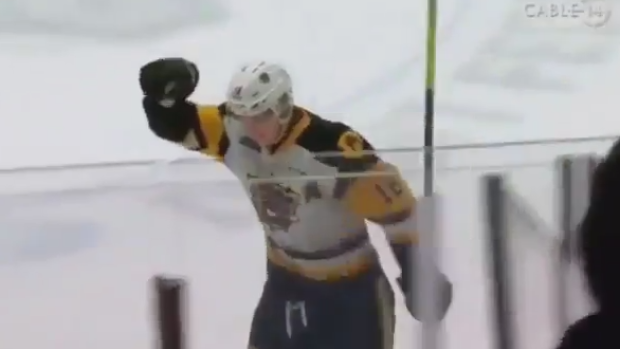 Earlier this past week, the youngest of the Strome family experienced one of the most peculiar plays in hockey you'll ever see. During a penalty-shot, the lights inside the FirstOntario Centre malfunctioned right when he scored, causing them to briefly turn off as he went in on goal. Strome scored on the shot, but the refs determined the goal wouldn't count.

On Friday in Flint, Michigan, Strome potted the game-winner in overtime and decided to do what Ryan Johansen did in the pre-season: he immediately headed for the door and waved his teammates over to leave vacate the ice.

The Bulldogs had head back home for a game on Saturday, so you can understand why Strome was in such a rush if that's case, otherwise it's just a legendary celly and move from the team's assistant captain. You also may recall Strome's epic lacrosse-style goal he scored earlier this season.

The 106th overall pick in the 2017 NHL Entry Draft is up to 18 goals and 31 assists for 49 points in 42 games while skating in his fourth season with the Bulldogs.