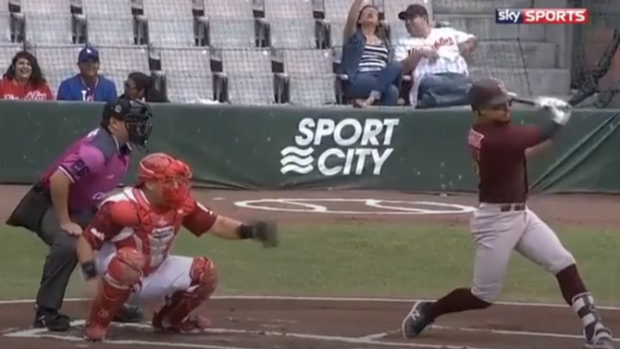 When you grew up participating in whatever sports you played, we all had a particular moment we can instantly think of where we had an encounter with a referee, an umpire, or an official that resulted in a heated argument, or worse, an unsportsmanlike penalty or even a possible ejection.

Maybe it was an icing that was blown off, or a player dove and you didn’t touch him. Perhaps it was a pass interference call, or a late hit that went unnoticed. Don’t even get us started on offside reviews.

Baseball might be the most scrutinized sport to be officiating, as every pitch needs to be examined by the ump if it’s a strike or not through the subjective leans of every single ump calling balls and strikes, unless the batter swings and misses, right?

Well, earlier this week, we featured two umpires down in the Mexican League that was involved in perhaps the worst check-swing strike call in the history of the sport. Yes, it was really that bad.

How bad? Let’s just watch it again for comic relief.

The worst call of all-time and it isn’t even close 😂 • (🎥: Twitter/RoutineBaseball)

Clearly, that was not a check swing and should’ve been called a strike. Keep in mind that this call was only the second pitch of the game between the Diablos Rojos del Mexico and the Algodoneros de Union Liga, too.

Perhaps the worst part about this other than the flat out erroneous call is that the home plate umpire and first base ump managed to collaborate on this brutal call.

Look, everyone screws up in their workplace from time to time, but going to this extreme and then doubling down on it demands discipline.

It should come to no one’s surprise that Domnguez Solis and Rodolfo Pastrana Tejeda, the two umps respoisble for this bogus were handed down season long suspensions by the Mexican League.

Not only were the two suspended, but their collegues, Manuel Carrillo and Armando Silvas, who were the other two umpires calling the game from second and third base, didn’t even step in to consult the two on the brutal call. They were handed down fines for not speaking up, and rightfully so.

So, there you have it. Have you ever wanted an ump or ref removed or suspended from a game? Well, you just got your wish, and it further laments that this was arguably the worst called ball in the history of baseball.