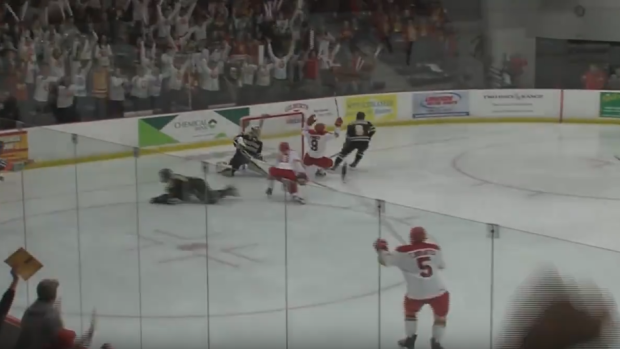 The Ferris State Bulldogs spoiled the 20th ranked Western Michigan Broncos home opener by a score of 3-2 on Saturday night.

With the Broncos leading 2-1 at 7:37 in the final frame, team was looking for some added insurance, and boy did they ever get a beauty.

Freshman Coale Norris and the Bulldogs went down ice on a 3-on-2 after forcing a turnover in their own zone. The freshman started the play by chipping it out of the zone to one of his teammates. Norris then received a pass after the Bulldogs headed done the ice and entered the opposition’s zone, but was then apprehended and fell over. The Oxford, Mich. native fell to his knees from the obstruction, but managed to fire off the rolling puck in time to score his first ever collegiate goal. The commentators gave Norris praise, saying that the goal was reminiscent of Bobby Orr's iconic goal that he scored before flying through the air that helped crown the Boston Bruins as the 1969/70 Stanley Cup Champions.

WHAT A GOAL! Norris loses his footing but finishes in amazing fashion! Dawgs up 3-1! pic.twitter.com/0Sdq7BMVKk

The goal ended up paying dividends, as the Broncos put pressure on late and made it a one goal game on a five-minute power play. Bulldogs’ tender shut the door late and managed to hold on to the one-goal lead, and finished with 37 saves to give the club their first win over Western Michigan in six years.

Ferris State improved to 1-1 on the season and will host the Northern Michigan Wildcats on Friday and Saturday night.

.@FerrisHockey salutes the crowd after a big non-conference win against Western Michigan. pic.twitter.com/fQHveyxqin