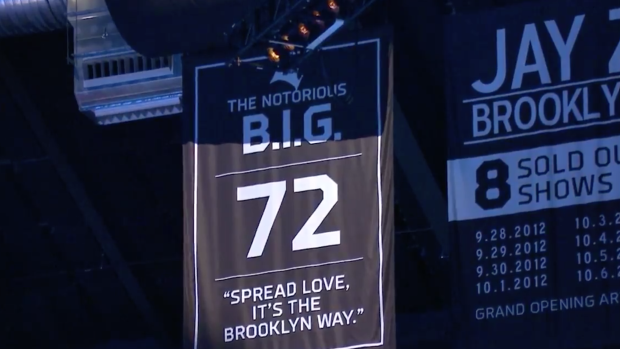 March 9th was the 20th anniversary of the death of rap legend The Notorious B.I.G., who was shot and killed in 1997.

Notorious B.I.G.'s easily the city of Brooklyn's most iconic and influential rapper, and although it's been so long since he was taken from this world, he's still alive in the hearts of many, especially all those who attend the Barclays Center for basketball games.

Since the Nets franchise moved to Brooklyn in 2012, Notorious B.I.G.'s music has been a staple at basketball games, whether it be during the game or during breaks in the game.

Seeing as basketball and Biggie go hand in hand, it makes perfect sense that the Nets decided to honour Christopher Wallace with 'Biggie Night' against the Knicks on Sunday.

A legend gets his jersey retired in his hometown. #BiggieNight pic.twitter.com/Y4iRAMx2We

Once the banner ceremony was over, Biggie's mom spoke to the crowd on hand.

Spread love, it's the Brooklyn way

To honor The Notorious BIG, the @BrooklynNets welcome Biggie's family and co on #NetsBiggieNight #RIPBIG pic.twitter.com/jmYQJFpBsF

Aside from the incredible banner ceremony, there was a pop up shop with Biggie shirts fans could buy to honour the rapper.

Don't forget to swing by the Swag Shop to check out our Biggie Pop-Up Shop tonight. #NetsBiggieNight pic.twitter.com/xgN67FPND6

Back to back threes from Brook Lopez. #Nets lead 13-8! #NetsBiggieNight pic.twitter.com/owWKXUuP9o

.@QuincyAcy HOT from deep as well! 🔥🔥

You're not stopping him.

Brook Lopez is SIX for SIX from deep 🔥 pic.twitter.com/T6J0mhqyK1

The Nets won, but more importantly, the city of Brooklyn and the basketball world honoured a legend in the best way possible.