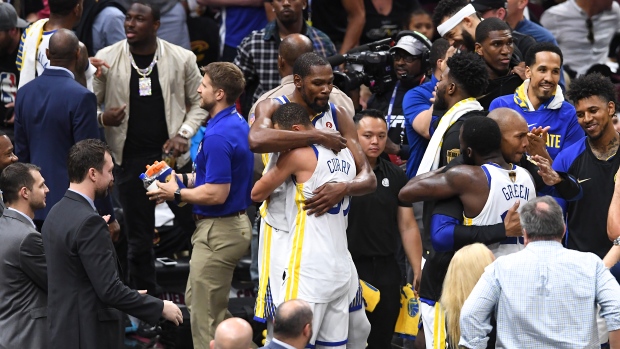 Kevin Durant and Steph Curry are champions once again, after the Golden State Warriors’ Game 4 win to complete their NBA Finals sweep, and Nike and Under Armour both released new ads to congratulate their respective sponsored athletes.

Nike revisited Durant’s origins and journey, tracing his path through high school in Texas and with teams such as the Seattle SuperSonics and Oklahoma City Thunder, through to the culmination of his efforts as, after tonight, a two-time champion and Finals MVP.

Meanwhile, Steph Curry was the subject of an Under Armour ad that recounted the ways he’s changed the game. Never has the old criticism of all of the kids trying to shoot like Steph Curry been so celebratory. Is he ruining the game? The ad dares you to stop him:

The Nike KD X and Under Armour Curry 5 are both on sale now. To see how the rest of the sports world reacted to the Warriors’ repeat, we gathered all of the best reactions.

Steph Curry and the Warriors are crowned NBA champions for the second straight year!