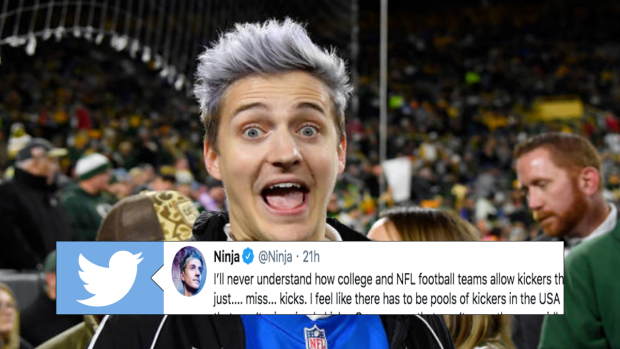 Die-hard sports people always get a little sensitive when Esports get compared to traditional sports.

Professional gamer and streamer, Ninja, took to the platform to raise a question about why NFL teams seem to have such a hard time finding consistent kickers, and was met with some pretty swift backlash.

I’ll never understand how college and NFL football teams allow kickers that just.... miss... kicks. I feel like there has to be pools of kickers in the USA that won’t miss simple kicks. Or snappers that won’t mess the snaps idk man it seems so SILLY. Would love opinions on this.

*Warning: some of the language used in the replies is NSFW*

As soon as he raised the point, traditional sports fans were quick to question his credentials.

I'll never understand how pro fortnite players just... miss shots. I feel like there has to be pools of pro players who can just click on their heads and hit every shot with 100% accuracy, just seems so SILLY.

This is the shittiest reply ever. Fortnite requires movement, editing, building, rotating, and hitting shots. There are not “positions” in Fortnite. A kickers job is LITERALLY to kick. Horrible analogy, kind of embarrassing.

No I didn’t lol

I’m with you, but kicking is almost purely mental at the highest level. These guys can casually make 50+ yarders outside of game conditions but it’s a different thing entirely in game.

Dude I would be paying 10s of thousands of dollars to get my kicker therapy and make him practice mediation with monks in the off season. If it’s a mental game which it definitely is... secure that mental game@

Man this is a bad take. Everything in the kicking process is harder than it looks. It’s like asking how do basketball players miss free throws

Lmfao..I can tell you never dressed out in gym class..stay behind the PC cuh https://t.co/EPvWY8MYmZ

I played soccer for 18 years but ok.

Sports talk aside, I think we all learned a valuable lesson today.