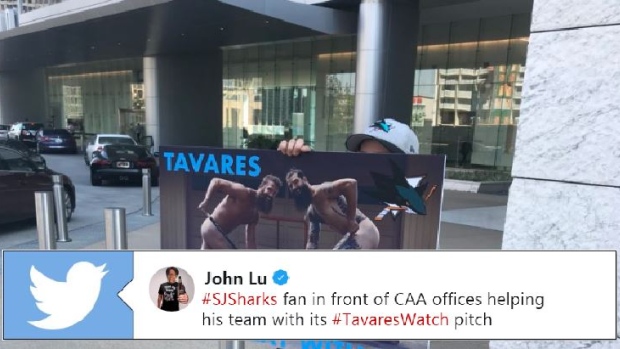 It’s Tavares-madness in the NHL as hockey fans await to see where the superstar lands. Many speculate that he will be heading back to the New York Islanders, where he has spent his entire career, especially after the team managed to land Barry Trotz at head coach and Lou Lamoriello as GM.

Not to be bothered, other teams have put together their pitches for JT. Tavares is listening to a number of team offers before he makes his decision, one that has potential to seriously shake up the NHL.

One team that has reportedly been extremely interested is the San Jose Sharks. The Sharks have been good for a long time, but they’ve never been able to secure that elusive Stanley Cup. They believe that a Tavares acquisition could just be the final piece of a puzzle (I mean, he’s a pretty massive piece to any puzzle…)

Ahead of Tavares’ meeting with the Sharks, one fan decided to come out and try his own luck at recruiting the star centre. Not quite sure if it is what Tavares is looking for, however…

Well, that’s one way to get your team noticed. Strangely, it’s not the oddest recruitment technique we’ve seen for Mr. Tavares. That title would go to New York bagel shop owner Donald Rosner.

@91Tavares John, i own a bagel store. The best bagels in New York. If you stay with us I will personally deliver bagels to you and your wife fresh every morning for the rest of your or my life. We love you John. Please, stay here where u were born and get us a cup.

The hashtag #bagelsfor91 has taken off as a result. No matter where Tavares lands, sparks are sure to fly.