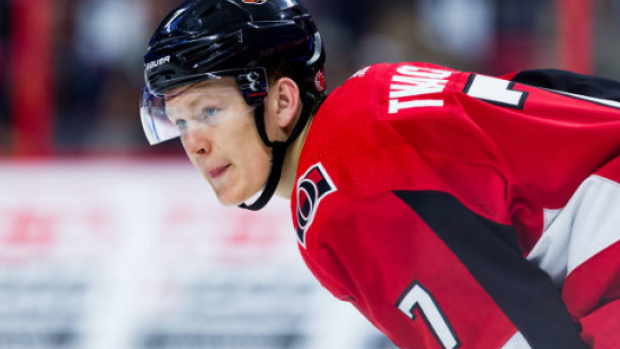 When you play the game of hockey like a Tkachuk family member does, chances are you’re going to need your equipment fixed up from time to time on the bench.

During the second period of action in Monday night’s Sens and Stars game, the TSN camera’s caught Brady Tkachuk getting some work done by one of the Sens equipment managers while the play was stopped.

The still image is even more hilarious.

We might be only two weeks into the NHL season, but Tkachuk is already becoming one of the more comical characters around the NHL.

The younger brother of Matthew added to his rookie campaign with his third goal of the season to give the Sens a 2-1 lead over Dallas at the start of the third period. The goal stood up as the game-winner, as the Stars knocked off the Sens 4-1.

Tkachuk is now two points off Elias Pettersson for the NHL's rookie scoring lead with 3 goals and 3 assists in four games played.