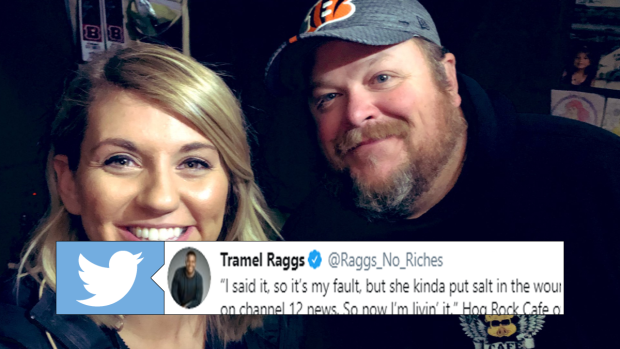 It’s been a pretty rough season for the Cincinnati Bengals and their loyal fans. While the Bengals have been perennially unspectacular for a number of years now, this year they aren’t just sub-par… they’re BAD.

While the whole fan base has pretty much thrown in the towel this season, one fan in particular is struggling more and more with each and every L. Jeff Lanham made an ill-advised bet back in Week 5, and it’s cost him bigtime. We aren’t talking about money, though, we’re talking about something much worse. He has to live on his restaurant’s roof until the Bengals finally win a game.

Another Bengals loss means this guys still sleeping on his roof pic.twitter.com/15p6AxkqSn

Lanham owns Hog Rock Café, and the bet was made with a patron about the Bengals playing the Cardinals. Cinci wasn’t able to pull out the W on that one, and they haven’t been able to ever since either. Lanhem continues to live on the roof.

Luckily for the Lanham, there may be an end in sight. The Bengals play the Steelers next, who are likely the most banged up team in the league right now and may have lost James Conner and JujJu Smith-Schuster for a period of time now. After that, they face the lowly Jets, the underperforming Browns, and then after an essentially unwinnable game against the Pats they face the Miami Dolphins.

Saying that, all those teams are looking at the Bengals and thinking “Thank God we have them this week”. They’ve gotta win sometime… don’t they?

Remember @Bengals fan Jeff Lanham? The man who pledged to live on the roof of his restaurant until the team gets a win? Well we’re checking on him this morning after yesterdays loss against the Raiders. Here how he’s holding up on @FOX19! pic.twitter.com/oLK8w6hBCg

Ole boy may very well be on that roof for 2020 kickoff next year.