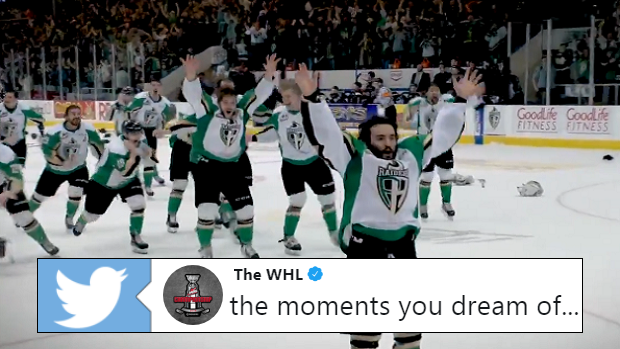 The Prince Albert Raiders are WHL champions and it couldn’t have happened in more dramatic fashion.

It all came down to one final game at the Art Hauser Centre between the Raiders and Vancouver Giants. Game 7, overtime, one goal to decide which team would advance to the Memorial Cup Tournament in Halifax. With less than two minutes remaining in the first extra frame, forward Dante Hannoun fired home what was essentially a tap-in from teammate Noah Gregor to beat Giants goaltender David Tendeck. From there, all chaos broke loose as Hannoun’s teammates rushed to celebrate with him on the ice.

It doesn’t get much better than this!

The goal marked Hannoun’s 14th goal of the playoffs and 24th point overall. It was goaltender Ian Scott, however, who took home some extra hardware as the most valuable player from the WHL’s postseason. The 2017 Maple Leafs fourth rounder led all goalies with a 1.96 GAA, .925 SV% and 16 overall wins; five more than Tendeck.

.932 save percentage and 8 shutouts in the regular season.

.925 save percentage and 5 shutouts in the playoffs.

Signed his first NHL contract with the Maple Leafs.

The Raiders finished the season first overall with 112 points followed by the Giants, who collected 101 through 68 games. With the WHL season now in the books, Prince Albert will now face the OHL champion Guelph Storm, QMJHL champs Rouyn Noranda and the host Halifax Mooseheads for a shot at a national championship.