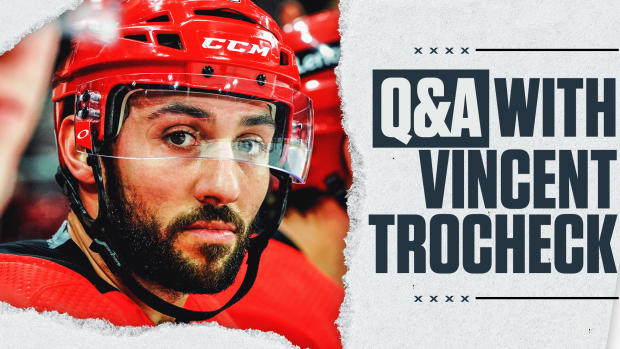 The Carolina Hurricanes are one of the best teams in the NHL right now.

They made some massive changes to the lineup this past offseason and you could say they capitalized on it.

The Hurricanes started off hot with an explosive 9-0-0 start to the 2021-22 season, and they didn’t stop there. The Canes have stayed consistent throughout the season, putting them in first place of their division and second place in the Eastern Conference.

Forward Vincent Trocheck of the Canes spoke with BarDown’s Raegan Subban to discuss the regular season, the Brad Marchand saga and the Stanley Cup Playoffs.

Raegan Subban: We’re nearing the end of the regular season and the Canes are doing incredible. What has been the key to the team's success so far?

Vincent Trocheck: We're kind of a tougher team to play against. We’re boring and annoying but it's just tight and simple play. We’re hard defensively and offensively. We get pucks deep, simple.

It's always good to go back to the basics and stick to that. There have been a lot of new additions to the team which isn't always easy. What do you think the biggest challenge was for you guys to overcome?

Our system and the way that we play is a little bit harder to adjust to, speaking from experience when I got traded over here. It was a little tougher to adjust, but the guys have done a really good job at picking each other up whenever there's mistakes and getting acclimated into the new system. Now, Max (Domi) obviously is going to have that challenge as well. Luckily we have the rest of the newer guys finally used to the system so now Max, a very smart hockey player, will be able to figure it out quickly.

The team has been especially solid at home (24-5-4). You guys recently went on a 14-game point streak in your own barn. In your opinion, what's the source of that home-ice advantage?

I mean our fans have been great this year. We’re a really loud building. I think just having that comfortability at home is always something a team strives to have and obviously in the playoffs home-ice advantage is really big. I think all of that combined is something that makes us really like to play in our building.

I can only imagine how much better it is this season with fans consistently in the building. How has the adjustment been going from a pandemic adjusted season to almost back to a normal one?

Yeah, you really didn't realize how important the fans were until you played it out. Having them back has been a huge boost to everybody's morale, and it makes home life a little bit more important. Getting the fans into the game and hearing them roar, obviously gets the guys going a little bit more.

Definitely a positive aspect to have back. I know it’s old, but I can't not ask about Marchand. Do you regret the rat comment? Because I know it spiraled a little bit on social media.

*Laughs* It actually got taken out of context. I wasn't actually calling him a rat. It was more like one of our reporters was asking if I was a rat and basically said we had similarities in the way that we like to get under people's skin. I mean, it is, what it is. I think if you were to ask Marchand if he was a rat he would probably say he is, but I mean, there's no animosity towards him for that.

What do you think about the Lambo to a Prius comment?

I really couldn't say much honestly. I mean, he had a pretty nice career for himself. I'd like to think of myself as something a little bit nicer than a Prius though.

*laughs* What kind of car would you consider yourself as?

Looking at the playoffs, what does the team need to do to continue at this high level of play?


I mean, honestly the way that we play and our identity, kind of just fits into the playoffs. While teams usually rise to the occasion, how we play now stays the exact same. Like I said earlier, very simple and very hard. It's annoying to play against but that’s just how you have to play in the playoffs. Staying tight defensively, and making sure that we’re not making too many mistakes.

Is there one thing specifically that you guys are working to improve on before that time?

I think our power play needs to improve a little bit. We've struggled a bit lately. Special teams are extremely large in the playoffs.. Last game we got two on the powerplay which was nice to see. Hopefully we can go in that direction.

We know everyone says it but playoffs are truly a different beast.

Oh yeah, I mean the playoffs are a new season. Everybody's playing for the same goal - to win a Stanley Cup. The play gets picked up a little bit.

It's been a couple of years since, but I want to go back to when you signed with the Canes. How were you feeling about that move at the time?

It was a little weird for me, obviously. It was the first time I played for a different team besides Florida after seven years there. It took a little time to adjust but since I've been here, I think I fit into the system really well and the guys here are great. We obviously have a good team and what we got going is nice. We have a good chance at making a run in the playoffs so it ended up being a good move for myself personally. And like I said, I like our chances.

What's your favorite thing about Carolina as a whole, and you can’t say the fans?

A lot of really nice golf courses in North Carolina. Pinehurst is just an hour down the road; really nice courses around.

There’s always one guy on the team that's the easiest target to get trolled. With the new additions, who’s been taking over that role?

Maybe, Steven Lorentz. He always has a smile on his face. He’s the easiest target just because he doesn't take anything personal. He's just a fun-loving guy. He’s always in the mix in the locker room so I think he's the guy that just kind of takes it and rolls with the punches.