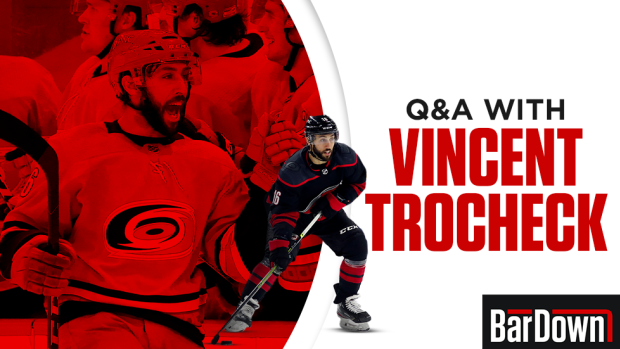 The team DJ is one of the most undervalued jobs in hockey.

While it may be fun and look easy, it actually holds a lot of responsibility. They’re held accountable for knowing the right song to play at the right time. Imagine having to make a playlist for a crucial game 5 in the Stanley Cup playoffs? Think about the Pressure! We have the utmost respect for team DJ’s and feel like they need to be given more credit.

We recently spoke to Vincent Trocheck of the Carolina Hurricanes and got the inside scoop on being the music guy in the locker room.

Raegan Subban: Thanks for taking the time to speak with me today! To start off, what has been the main focus for you this off-season?

Vincent Trocheck: Just trying to get healthy was mainly my number one focus this summer and then obviously working on every part of your game is something that you should be doing every summer and then getting in as much game time as possible.

Same old, same old for the most part sounds good! What do you think the team as a whole has to do differently this year in order to take the next step?

We've been pretty much the same team since I got here but this year we have some new faces. We got nine new guys. Every year you just gotta get a little bit better and focus on the details a little bit more. I think when you look at the playoffs the last two years, the main focus has just been a matter of scoring and special teams in the playoffs but I think that the additions that we made this summer are definitely going to help with that. We just gotta go out there, give it our all and look forward to the postseason.

Well, best of luck this season, we’re excited to see how you and the Canes do this year! I’m going to take a random turn with this one and lean away from hockey. Luckily for us, we found your Youtube channel and I have to ask about it. There’s two videos on there of some mixes you made and they are actually very fire.

What got you into mixing?

Honestly, I think it was like my second year in Florida that I was forced to be the DJ in the locker room and so I took over there and since then I've just been doing it everywhere. I got here and Eddie (Joel Edmundson) was the team DJ here but then he left the following season. So I took over.

Did it start off as you paying your dues or did someone catch onto you having the best music on the team?

It was just like, hey, you're a young guy so you're on music duty. Put together a playlist, and if we don't like it, then we're going to yell at you. *laughs*

Lets do a random scenario. You’re obviously on aux but someone on the team wants to play a song. Who would you say no to?

That's a good question. I don't know. Maybe Martinook (Jordan Martinook) because he might play a little too much Nickelback. *laughs*

What are three songs that will for sure be on the pregame playlist this October?

I got it right here. Love tonight, the David Guetta remix, Wave of You by Surfaces and Cloudy day by Tones and I.