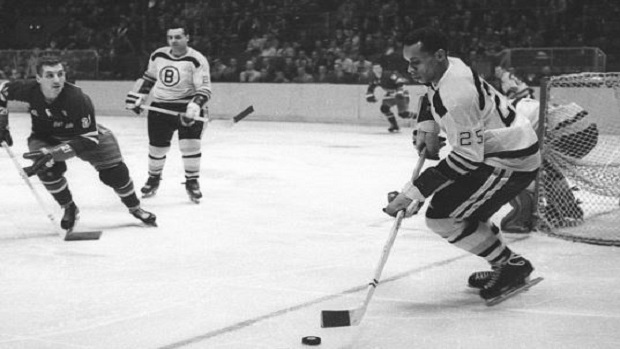 Willie O’Ree paved the way by breaking the National Hockey League’s colour barrier when he debuted with the Boston Bruins against the Montreal Canadiens on January 18, 1958.

"I experienced racial slurs and racial remarks directed from, not only players on the opposition, but fans in the stands,” O'Ree told BarDown.

In 1998, O’Ree became the NHL’s director of youth development and has been actively trying to positively change the game ever since. Now, even at the age of 85, he’s still not slowing down. O’Ree just released a new memoir, Willie: The Game Changing Story of the NHL’s First Black Player. The TSN Original Willie, which can be seen Tuesday at 8pm et/5pm pt on TSN, examines his impact on the NHL.

O’Ree recently spoke to BarDown's Raegan Subban by phone from his home about his personal hockey journey, and how there’s still more work that needs to be done within the NHL regarding racism.

Raegan Subban: First off, of course being Canadian you obviously played hockey but what made you want to pursue a predominantly white sport at such a high level?

Willie O’Ree: I've played about seven different sports growing up. The two that I really excelled in were baseball and hockey, but then I had to make a choice. I had this burning desire to play hockey. Once I found out that I could skate and maneuver the puck on the ice, having the wind in my face, I was just obsessed.

I have to thank my older brother Richard. He was not only my brother and my friend, but my mentor as well. He knew that I loved the game. When I told him that I wanted to be a professional hockey player and hopefully one day play in the National Hockey League, I knew I had to accept my goals.

You were clearly very passionate about the game but being the first black NHL player couldn’t have been easy. Did you ever want to give up?

Yes, when I went up to play with the Bruins in 1958, there were a few incidents. I just felt that I didn’t need that type of abuse. I could have just gone back to my hometown and played there. Although, I told myself, 'Willie, if you're going to leave the league, you’re gonna leave it because you don't have the skills and the ability to play anymore.' I just wanted to prove myself that I was good enough to play in the league.

My older brother helped me a lot. He would always say, “Names will never hurt you unless you let them. If people can’t accept you for the individual that you are, that’s their problem. Stay focused on what you want to do and work hard. Everything else will have a way of working out." So, that’s what I did.

Aside from the emotional setbacks from the racism you experienced, you also had a serious eye injury that could have ruined your dream. What happened?

It happened when I was playing in Kitchener, Ontario, in the Ontario Junior Hockey League. My defencemen shot the puck and it ricocheted off of a stick. I was standing in front of the net for a deflection but the puck struck me in the right eye. I remember dropping down to the ice. The next thing I knew, I was placed in an ambulance and then taken to the hospital. The doctors said, “I'm sorry to inform you, but the impact of the puck completely shattered the retina on your right, and you’re going to be blind. You'll never play hockey again.” I was 19 years of age, and the dreams and goals that I had set for myself seemingly were gone.

That’s such a devastating tragedy, how did you overcome it?

Within five weeks I was back on the ice playing. When I went back to play, everybody thought that I had recovered from my injury. I didn't even tell my parents that I was totally blind in my right eye. My parents went to the grave [thinking] that I could see out of my right eye. The only person I told was my younger sister, Betty, and I swore her to secrecy. I said, "If anyone finds out that I'm blind, I won't be able to play pro hockey and I definitely won't be able to get into the NHL."

Even today, a lot of people don't realize that for 21 years I played pro hockey with only one eye. There was an adjustment, but I just said, forget about what you can't see and just concentrate on what you can see. After the season ended, I was invited to Quebec Aces training camp. I made the team and didn’t disclose the fact that I can’t see. We won the championship that year and I said to myself, “Willie, you can do anything you set your mind to do if you feel strongly within your heart within your mind."

Now you're the NHL’s Director of Youth Development and Ambassador for NHL Diversity. Has anyone ever continued to make discouraging comments about your current position within the league?

Yes, even after I retired from professional hockey, I've gotten racial remarks and racial slurs. I just let it go in one ear and out the other. I've learned to, you know, accept these slurs and remarks that are directed towards me.

Are you surprised or shocked that players today and even yourself are still getting the same comments you did 60 years ago?

I’m not surprised, it's still there and it definitely still exists. It’s going to take a long time before it gets better. You know, you're not born with these hateful things, they're taught. I think we just have to educate and let people know what’s wrong from right. The one thing I learned from Martin Luther King Jr. was not to judge a person by the colour of their skin, but the content of their character. And there's so much truth to that.

It’s long overdue but what did it mean for you to finally be inducted into the Hockey Hall of Fame?

Oh my goodness, I was thrilled. You know, I only played 45 games in the National Hockey League. It takes way more than that to, you know, be good enough to make it, but when I found out the work that some people in my hometown were doing and the submissions that they were getting that they sent to the Hall of Fame Committee - when I got the phone call, I was overwhelmed. I was at a loss for words.

I was here in my home when they called and said, “Mr. O’Ree, I just want to let you know that you've been inducted into the Hall of Fame.” I was so happy. My wife was there and it was just a wonderful feeling. I feel that I've been blessed over the years for some of the wonderful things that have been happening to me.