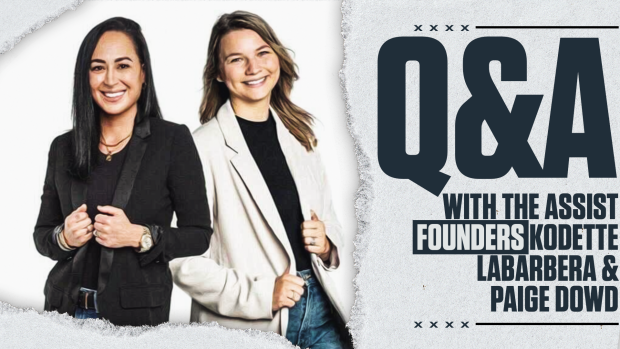 Hockey is for everyone - and it should be.

While it’s fun to attend for most, it can be the complete opposite for others.

Paige Dowd and Kodette LaBarbera, The Assist Sensory Kit founders, recognize these struggles and are doing their part in making the game a more positive experience for those with sensory disorders. Paige, wife of Washington Capitals forward Nic Dowd, and Kodette, wife of former NHL goalie Jason LaBarbera, were connected through their passion for Autism to create something bigger. Dowd graduated from St.Cloud State University with a degree in speech pathology, and LaBarbera's son Ryder was diagnosed with Autism at the age of 3 in 2012.

While they both had (and still do) their own separate initiatives going on, the two women joined forces together with the NHL to make a difference in the hockey world.

Paige and Kodette recently spoke with BarDown's Raegan Subban to discuss the kits and their partnership with the NHL.

Raegan: How do you two know each other?

Kodette: We don’t. We met online.

Paige: Match.com *laughs*. No, we were introduced through mutual friends who overlapped with both of us on the same team. We've wanted to meet but with COVID, the borders, and our kids, we haven't yet. Hopefully this summer.

Kodette: I've met her husband. He's met most of my family, but I haven't met Paige. My brother in law pointed out to me that Jason (LaBarbera) got traded from LA to Vancouver in 2008 for a draft pick, which ended up being Nick (Paige’s husband). The hockey world is so small.

It’s fate! When did you start The Assist and what was the process like?

Paige: We started talking about it with the NHL about a year ago in March 2021. It took quite a bit to get it going and figuring out what we were gonna do. We thought…who's going to supply this? How are we going to fund this? We hadn't really done any of that before but we made our first team commitment at the University that Nick and I went to, then our first shipment went out at the end of August.

For those that don't know, can you explain what a sensory kit is?

Paige: A sensor kit is basically just a kit that has all of these tools in it to help either tone down the stimulus that people with sensory disorders are getting, or give them an output for a stimulus. It has things included that will help make the experience more enjoyable, like headphones or sunglasses. It also has fidget toys to help give them an outlet to stay in their seats and enjoy the game like everyone should.

Kodette: I always say, Ryder (Kodette’s son), for example, has such a heightened sense of smell and hearing. He carries his headphones with him all the time because he never knows when it's going to be too much for him. He can hear so much even when we are just whispering.

What’s included in the kit, why is it important and what does it do for those that have sensory disorders?

Kodette: The NHL put us in touch with Bauer so they donated the bags and the foam squishy pucks. There are noise canceling headphones from “Your Ears Rock” that are 3M, so really good quality. Sunglasses, fidget toys, and one of the bigger pieces is our social story. Every family’s different but from my own personal experience with Ryder, he always needs to know what to expect. The social story goes through the steps of a hockey game, you know, starting from security, and having a ticket to having to give up your stuff. The sounds of the security system and everything. There's just so much going on. This social story is huge for them to understand what to expect throughout the game, because it's just nice when it's talked through for them.

Paige: It also has activity sheets in the back with crayons, just to give them another little element of something to do if they don't feel like watching the game right away.

Kodette: The teams are donating also. They added their mascot into the bag to make it a less scary experience, and then there's popcorn vouchers because snacks usually  makes the time last a little longer.

Heading to the game tonight? 🔥 We teamed up with @theassistkit to make The Assist Sensory Kits available at all CSEC games & events!

What has the response been in your first year of selling the kits?

Paige: We just had a family come through Dowd’s Crowd, a charity my husband and I have in DC. We provide sensory kits to families, and they’ve just said everything felt normal, you know, like a normal family outing. Which seems unreachable sometimes. They had fun and their kid had fun, so it was really nice to see.

Kodette: We've been getting such good feedback with it. We saw a kid wearing the headphones at a Flames game, so I went up and introduced myself. He just played with the fidget spinner and everything the whole time, and was loving it. His dad Tweeted at me later that night just to say thank you so much and that it was such a good experience - that's what we want. With my own personal struggles, and with Paige being so connected to families with autism and sensory disorders, we just want to make it easier for them. We know how hard it can be just to, you know, do normal things with your family.

How did the partnership with the NHL come about?

Kodette: The NHL has just been super supportive from the beginning and have helped where possible. Obviously they can't tell each team to buy our kits but they've been doing what they can and connecting us to people who they randomly think of. They were like, “Hey, would you want to partner with Dunkin Donuts?” Absolutely!

Paige: Yeah and without them connecting us to Bauer, we probably wouldn't have really been able to do this in an affordable way. We wanted to keep it cost effective, so not buying the backpacks and the foam pucks really helped to bring the cost down for us.

How much is the cost of the kit and where can you buy one?

Paige: The kits are $40. You can buy them online on our website or buy them at rinks through NHL teams. So far we have partnerships with the Washington Capitals, Calgary Flames, Edmonton Oilers, Montreal Canadiens, Vancouver Canucks and Philadelphia Flyers. We also partnered with the Syracuse Crunch of the AHL.

How did you guys come up with this idea together?

Paige: We thought, what can we do? How can we make it bigger? Hockey careers in general are so short so we were like, what can we do to try and make an impact in such a short amount of time? Then just came up with this.

Kodette: Well, we both kind of have our own autism things going that we're like, how can we make something bigger using our platforms together? Paige mentioned, her and Nick have Dowd’s Crowd in Washington, then we have a sweater fundraiser that is in our fourth year called Ryder's Crew. We sell sweaters with a little autism logo that we came up with and a portion of the proceeds from Ryders Crew go into The Assist Sensory Kits. We just want to grow and help more people.

Paige: Ever since I was a kid, I knew I wanted to work or go to school or do something with special education. I did speech pathology for undergrad, and then followed Nick to California where I started working as an autism therapist  in the schools and in homes for families. For Dowd’s Crowd, we provide children with sensory needs the opportunity to attend Washington Capitals games. There’s a link for families to go on there and apply. If they’re selected, we bring them to a game and cover the cost of their tickets and sensory kit. There were no meet and greets this season due to Covid but we try to make it special.

What was the biggest challenge with creating the kits?

Kodette: We've got business on both sides of the border, so just navigating those little areas that are different for us, We keep it separate so our accountants don't hate us when they have to file taxes (laughs).

Paige: We hand assemble each kit so when we get 200 orders, I make 200 on my couch. I force Nick to help but It's time consuming. The reward obviously makes it worth it. Even just seeing a little kid in the stands with the headphones or hearing what the families have to say .

What are your long-term goals for your Sensory Kits?

Paige: We would love to get into other sports and venues, just to try to make all that more accessible.

You both have your little initiative on the side, what motivates you to keep going with The Assist Sensory Kits?

We're so lucky. You know, when you're doing these kinds of things, just a reminder of how fortunate we are to come across some really amazing people. Everyone's been so supportive of the teams that we've talked to and it's been a fun little adventure and sharing it with hockey friends and stuff, too.  It's been great. We are very supported.

Get your own Sensory Kit here!