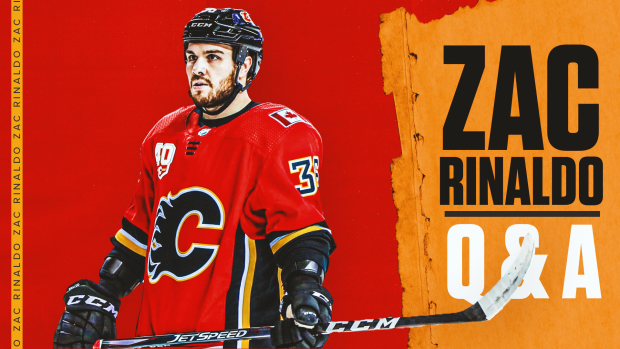 It’s easy to forget that some of the NHL’s toughest players are also pretty huge beauties.

“That for me is the hardest part of joining new teams because, you know, some guys see me on the ice and think whoever I am on the ice, I must be off the ice.” Rinaldo told BarDown.

Some hockey fans might place Zac Rinaldo in that category. While he’s made an effort to change his game, the 31-year-old winger has been suspended a total of five times by the NHL.

With that said, we’re not here to discuss his time spent in the press box. Aside from signing a one-year, two-way contract with the Blue Jackets this summer, he has some personal exciting news that he’s been working on!

Rinaldo recently spoke with BarDown's Raegan Subban to discuss joining his new team and the recent launch of “Tenacity Training”, a top-tier facility that he opened in his hometown.

Raegan Subban: Thanks for joining us, Zac! How's your summer been so far?

Zac Rinaldo: So far it has been very busy. Probably the busiest summer I've ever had in my life, but it's been fun.

It’s nice to hear that you’ve been able to have some fun on the side but I assumed it’s been pretty busy. What drove you to opening up your own training facility in Hamilton this year?

Basically I wanted to give back to my hometown something that everyone could benefit from, whether it be hockey or just staying in shape. That's my main goal, to give back. My mindset behind wanting to do it started a long time ago. Probably five, six, seven years ago. I just never knew how I wanted to navigate it but one day I decided to put a business plan together.

For me, I was training at 10:00am then after I would have an appointment at 1:00pm to get physio done. Then I had to drive over to somewhere else for 3:00pm to get a massage and you know, do everything a pro athlete has to do. So I said to myself, something needs to be different here because at this point I was going to Toronto every day and was still only getting a workout in with a little bit of recovery. It was just taking up way too much time so I thought to myself, why don't I just do it? My guys will be able to come in at 8:00am and be out the door at 11:00am with everything they need done. Then they can enjoy the rest of their day.

How was the official first summer of it up and running?

How has the process been so far?

My sports therapist that helped me out with all of my injuries for ten plus years is helping me right now. He gave me his space within his therapy office. It was not big at all, but it's a gym. I bought some equipment and he gave me his equipment. I was already there anyway so we made it work. It’s not finished yet. The gym is going to be inside of a building that'll also have sports doctors, therapists and family doctors as well so you can literally workout and recover. For example, if you need your blood work taken to see what you're deficient in or do a stool sample you can do that too. It's still in the process of being built but it's happening very quickly! Hopefully by May it will be complete.

Wow, that's so exciting. Congratulations! Some other big news on your end this summer is that you’re going to be moving down South a bit. You were recently picked up by the Blue Jackets. How has the transition been from Calgary to there?

I didn't know anybody on Calgary when I first got there so it was a little tough. Knowing a couple of guys down there will be a much easier go around because they can introduce me to other people. I won't have to go there and try to show myself as a brand new person because I already have some guys who know me. That for me is the hardest part of joining new teams because, you know, some guys see me on the ice and think whoever I am on the ice, I must be off the ice. So I've had to go into some teams and really show them that I'm not a f****** lunatic. I like to go there and show that I’m a down-to-earth guy who likes to play hard on the ice, but off the ice I’m not as rugged and raw. But yeah, I'm really excited.

What’s one thing you want Columbus fans to know about you going into this upcoming season?

I want them to be prepared for me to make a lot of noise. I say that because when I’ve made a big hit with other teams that I’ve been on, some fans didn't really know how to react because they’re not used to it. Like, when I blew people up in Philly, the crowd would be electric and then in Calgary when I hit them, the crowd would go along. But with other teams, I wouldn't get that same reaction because those fans didn't know if that's a penalty or you know, a suspension. So I just want them to be prepared. I'm going to be making a lot of noise and with everything I do but my intentions are to do it clean. Hopefully they will have my back while I'm doing it.

Love to hear it! Okay, last question. We want to know, what’s your greatest hockey story ever?

Okay, I have great hockey stories that I probably can’t tell you or the public, but one thing that I'm very thankful for I would say, was when I was in Philly. My first year, I won the award voted by the fans, called the Gene Hart Memorial Award. It’s voted by the fans for the player who played with the most heart all season long and I was given that towards the end of the month. My name is up there with Hall of Famers, who won that award and also played for Philadelphia. I take pride in playing with my heart so to be recognized for that alone, means the world to me. That's probably one of my, you know, personal cooler hockey stories on a more positive note.