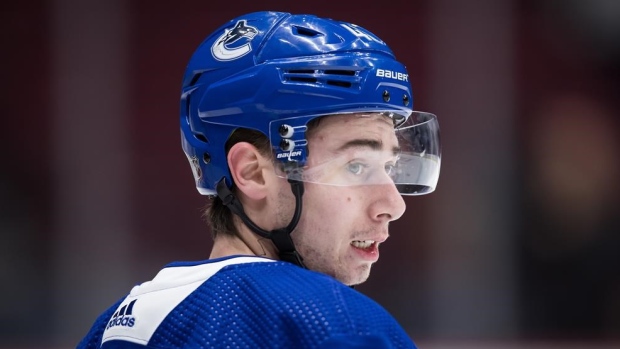 Now that the NHL regular season has come to a close, Quinn Hughes officially finishes as the leading rookie point-getter with 53 points (8 goals and 45 assists) in 68 games for the Vancouver Canucks.

It was an impressive debut season for sure, and he’ll be in the running for the Calder Trophy as well. Statistically speaking, Hughes joins Hall of Famers Bobby Orr and Brian Leetch in some rarefied territory as one of the few defensemen to win the rookie scoring title.

Quinn Hughes of the @Canucks led all @NHL rookies in points this regular season that came to a close Tuesday.

According to @EliasSports, he is the 3rd defenseman to lead rookies in points over the last 80 seasons, joining Hall-of-Famers Brian Leetch and Bobby Orr. pic.twitter.com/mW5wvpdS5o

Hughes is followed by another defenseman on the rookie scoreboard — Cale Makar of the Colorado Avalanche had a terrific year as well, finishing with 50 points in 57 games. These two should be well worth following for the next few years in hockey.

If you go far enough back in the history books to the pre-Original Six era, the list of defensemen to lead rookies in scoring swells to a total of seven players, including Hughes.

List of NHL defenseman to win the rookie scoring title: