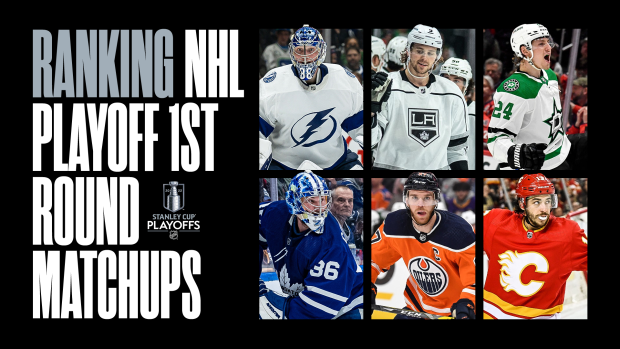 Another long 82-game season has divided the contenders from the pretenders, and we finally know which teams will be igniting or re-igniting playoff rivalries this coming week. With 16 teams battling for a shot at Lord Stanley’s mug, we’ve decided to rank each of the 1st round matchups based on what we’re most excited for.

The Calgary Flames seem to have finally rounded into shape. Potential Hart Trophy candidate Johnny Gaudreau has been leading the way for Calgary, but other contributors like Matthew Tkachuk, Elias Lindholm, and Andrew Mangiapane make them more than just a one-trick pony.

The Stars are one of those workmanlike teams that simply get the job done, and they don’t need to be flashy about it. They’re aging core doesn’t have the same magic it used to, but solid defending and consistency have given Dallas a shot at playoffs. They’re the only playoff team that finished the year with a negative goal differential (-8)

We’re excited for every series, but other ones just more-so than this. Always nice to watch the Canadian teams for us up north of the border, though!

While the Avs are no doubt one of the most electric teams in the league, this just seems like too much of a mismatch to put any higher. The Avs are young, quick, and outrageously skilled. On top of that, they should be receiving another boost when captain Gabriel Landeskog returns from injury, potentially for Game 1.

The Preds are a solid team, and the resurgence of Matt Duchene has given them a little more firepower up front. If the Predators stand any chance in this series, however, it’s likely going to come from the back end. Potential Norris Trophy recipient Roman Josi will have a huge workload trying to shut down Avs star players, and Juuse Saros will be put to the test.

Saros has proven that he is one of the league’s hottest young crease talents, but having to play a 7-game series against the high-octane Avalanche is a tall feat even for the best of the best.

Two teams that aren’t generally known for their flash, this matchup could easily go either way. While the Wild have been subjects of “perpetual mediocrity” in recent years, it certainly feels difference this year. They were one of the more active teams ahead of the deadline, and they seem like they’re better than ever.

On the flip side, the Blues are a pesky team that is capable of pulling off the upset. The Blues may have found a gem in goaltender Ville Husso this year, but we’ll see if they can put it together against a team that has Marc-Andre Fleury and Cam Talbot trading starts in the crease.

While this series ranks a little lower, we’re really excited to watch Kirill Kaprizov in playoffs after an electric regular season in which he really broke out.

Any playoff series with the Boston Bruins seems to deliver, and a matchup against the high-flying ‘Canes certainly fits the bill.

This matchup would be absolutely loaded with offensive firepower, with stars like David Pastrnak, Brad Marchand, and Patrice Bergeron typically causing havoc in the postseason, and younger players in Sebastian Aho, Andrei Svechnikov, and Teuvo Teravainen representing the more modern NHL star.

On top of that, both teams are gritty. The Bruins have long been considered one of the peskiest teams to play against, and the ‘Canes would also fit into that category after Max Domi. Also, Brad Marchand vs. Vincent Trocheck (AKA, the Lambo vs. the Prius) anyone? Sign us the heck up.

The one issue that sends this matchup tumbling down the rankings is the unfortunate injury to ‘Canes goalie Freddy Andersen that may not resolve in the 1st round. He was such a huge part of their success, and if the Bruins do pull off the series win it will be hard not to look back and wonder “what if Freddy played.”

Who are you, and WHAT HAVE YOU DONE WITH THE L.A. KINGS?

The Kings have to be the biggest surprise of the entire NHL season. They hung around a playoff spot all year despite not really making any massive changes from last season, but rather having guys step up and play solid all year. Their goaltending has been improved, but you wonder if they have what it takes to make a run in the playoffs.

The Kings have the second lowest goal total (239) among teams listed in the matchups, with only the Stars scoring fewer times (238).

The Oilers have been the definition of streaky this season, and the outcome of this series will likely just depend on whether they’re hot or cold. Either way, this one is shaping up to be pretty exciting.

Oilers vs. Kings: who would have thought? This matchup gets a boost on pure quirkiness.

The Washington Capitals have to be one of the most dangerous 8th seeded teams in recent history, right?

The East is absolutely wild this year, with every team seemingly having the makeup to at least be a tough out in playoffs. The Panthers should have enough firepower on offence, and enough stability on defence (especially if they get Aaron Ekblad back for Game 1) to be able to handle the Caps, but would anyone be surprised if the aging core of the Caps were to get hot and pull and upset?

This one could definitely end up being one of the more entertaining series if the Caps can keep up.

Oh man, would this one ever be fun.

Rangers vs. Pens would be the story of two teams on opposite sides of the mountain. The Rangers are young, quick, and flashy, while the Pens are experienced, consistent, and the home of two generational talents.

The Rangers seem to have the edge, particularly with the breakout of Igor Shesterkin in net, but the Pens have enough tenure to put up a fight against anyone. It’s been the Penguins show in recent years, but the Rangers are trying to snatch the microphone away.

Straight into my veins.

Seeded No. 2 and No. 3 in the division, these two teams are loaded up with talent and have the makings to go on a deep run. While the Leafs will undoubtedly draw the chirps for being an easy 1st round exit, you can bet that the two-time defending Stanley Cup Champion Bolts won’t be taking the Buds lightly.

One of the biggest storylines going into this matchup would definitely revolve around goaltending. While the Bolts have Andrei Vasilevskiy bolstering their crease, the Leafs tendy situation has become a question mark down the stretch. With Petr Mrazek now missing time, it’s up to Jack Campbell to prove he has what it takes to be a starter when push comes to shove.

Regardless, these are two of the most offensively gifted NHL squads, and a playoff clash between them will be like watching two rams charge at each other full speed. You won’t be able to pull us away from our TVs for this one.