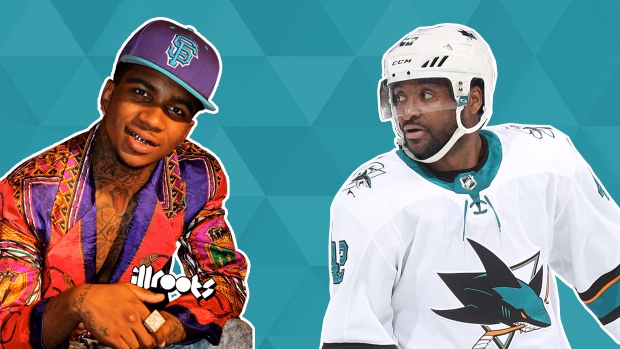 Lil' B and Joel Ward

Rapper Lil’ B has shown over the years that he’s not afraid to let the sports world know which teams are fortunate to have his blessings. From cursing Kevin Durant during his time with the Oklahoma City Thunder because he wouldn’t play in a good ole fashion game of 21, there are those that really do believe the Berkeley, California native truly has magical super powers.  Sharks forward Joel Ward reached out the Bay Area rapper by tweeting at him and asking for the Sharks to have his blessings.

@LILBTHEBASEDGOD can the San Jose Sharks get some #BayAreaLove with your blessing for the rest of the NHL Playoffs pls? #NextStopLasVegas

The based god replied to ward, letting know that him and his Sharks have officially been blessed ahead of their second round series against the Vegas Golden Knights.

Zam Bose in San Jose the legendary San Jose sharks are #blessed by “ The BasedGod “ I would also love to come to a game and meet staff and players ! - Lil B

Ward and the Sharks responded to his request of wanting to attend a game at SAP Center and met Ward and some of the Sharks.

Let us know when and we'll make it happen! 👍

Now this is an honor im a huge fan of San Jose state and San Jose sharks are a huge part of pop culture! - Lil B

Boom. The Lil B x San Jose Sharks collaboration. The Sharks will start the series on the road in Vegas, so the invitation will have to wait until at least Game 3 in San Jose, unless Lil’ B is willing to travel to Sin City.