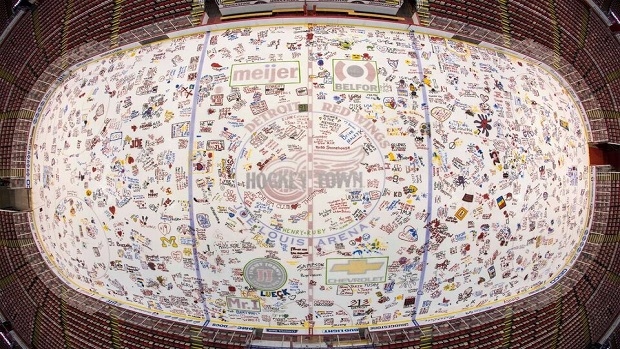 The Detroit Red Wings said goodbye to their long-time home this past season as they're set to move into their new arena for the 2017-18 campaign.

All season long, Red Wings fans from far and wide paid one final visit to Joe Louis Arena before the team moved on, and the fans made sure to go out with a bang.

On April 9, 2017, the team went all out for their final home game. From a red carpet to the fans throwing 35 octopuses onto the ice, they made sure to made it a night no one would forget.

On Wednesday, the Red Wings opened the doors to Joe Louis Arena one final time and let Red Wings fans bid farewell to the arena they called home for so many years by painting on the ice.

Absolute honor to be at the Joe one more time. #PaintTheIce pic.twitter.com/TK4d6awXs2

This was by far the best thing at #paintthejoe pic.twitter.com/qWMKCbQVr0

Most teams tend to do this on a yearly basis, as it’s a fun way for the fans to close out the season, but this was a little different for Red Wings fans as it would be the last time they would ever step foot on that ice.

Joe Louis Arena will truly be missed by the entire hockey community.