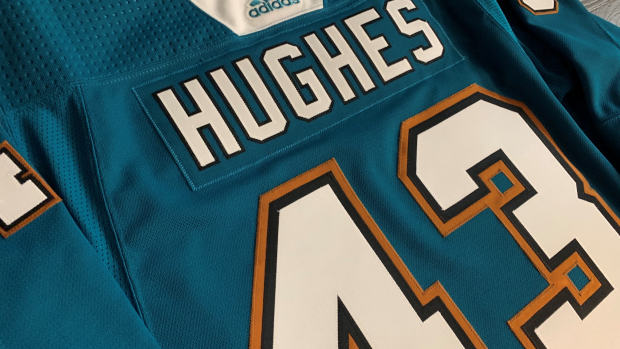 For years, BarDown has been a place where we've showcased some of the best jerseys mashups and concepts floating out on the internet.

Over on the Canucks subreddit page, we discovered a fantastic mash-up that will be eye candy to Vancouver sports fans.

Reddit user 'CanucksForever67' decided to make a Vancouver Grizzlies and Canucks mash-up of potential Calder Trophy-winning defenceman Quinn Hughes. Not only did he draft up the design, he actually got it made into a jersey.

Even if you're not a Canucks fan, you can't help but be impressed with the detail and quality.

Here's some background on the concept and the jersey courtesy of 'CanucksForever67'.

"This has been a project that has been a long time in the making, but the final pieces arrived today thanks to u/customize-sports. I got jealous of seeing all these teams doing really cool Warmup Jerseys, and I still miss our Vancouver Grizzlies to this day since they were so wrongly stolen away from us, so here is my custom made Adidas MiC Vancouver Grizzlies/Vancouver Canucks Mashup Quinn Hughes Warmup Jersey. I stripped the crest off a Penguins MiC Practice Jersey, then had the Grizzlies and Canucks patches made to order, and finished it off with a custom-designed kit in Grizzlies colours and font by Customize Sports. I have a lot of wicked jerseys, but this one is my new #1."

Fantastic. Hughes, the 20-year-old American defence and older brother of Jack, leads all rookie in scoring with 53 points (8 goals, 45 assists) in 68 games and became a fan favourite in Vancouver.

The Grizzlies left VanCity in 2001 after coming into the NBA back in 1995. The Memphis Grizzlies wore throwback jerseys this season paying homage to the old turquoise jerseys the team wore in Vancouver.