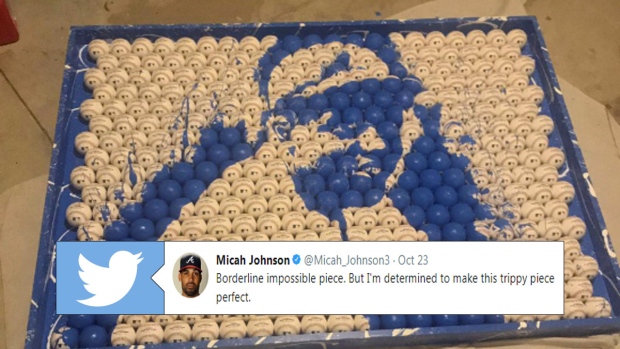 Micah Johnson will be suiting up for his fourth MLB franchise this season after the Cincinnati Reds claimed the second baseman off waivers from the Atlanta Braves on Thursday.

The 26-year-old only appeared in 18 games with the Braves last season, and played a combined 45 minor league games with 40 of those coming at the Triple-A level. One way Johnson likes to stay busy during his spare time is through art.

Over this past few weeks, the Indianapolis, Indiana native combined his passion for art and his passion for baseball and recreated a portrait of Jackie Robinson using nothing but paint and baseballs.

The piece of art consists of 350 baseballs and is one of the coolest sports related pieces of art we have ever seen. Here's the original photo he attempted to recreate.

The newest member of the Reds even has his own website that features all of his previous projects, including the tattoo he designed for Braves second baseman Jace Peterson.

Hopefully this is just the first of many portraits he recreates using baseballs, because his Robinson portrait is spot on.