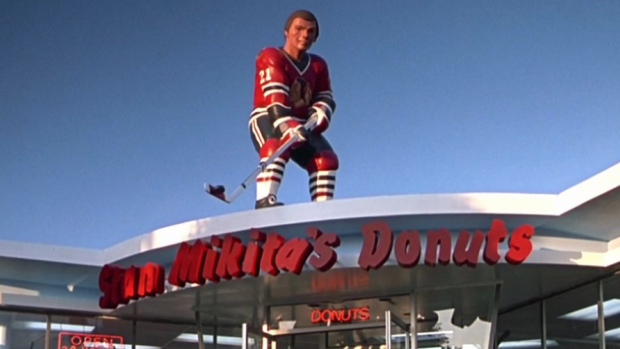 The hockey world lost a legend on Tuesday as Stan Mikita passed away at the age of 78.

Mikita was a Hockey Hall of Famer and an incredible human being on and off the ice.

As much as people will remember what Mikita accomplished on the ice over the course of his career, fans will also remember him because of a fictional donut shop in Wayne's World.

The Stan Mikita Donut Shop in the movie Wayne’s World.

'Stan Mikita's Donuts' was a donut shop in Wayne's World that came to life for the 2017 All-Star Weekend and in that same year, Mike Myers explained to Sports Illustrated's Alex Prewitt where the inspiration for the donut shop came from:

A lot of Wayne’s World is a transposing of my growing up in the suburbs of Toronto. One of the things that we would do is go to Tim Horton’s donuts out in Scarborough. It’s very flat and suburban. We needed a location for Wayne and Garth to hang out. We needed to [put the] people [in] the world, because it was in the basement on the TV show [Saturday Night Live]. We needed to have it be Wayne’s world, outside of the basement, so we thought Tim Horton’s, [but] because it was Chicago, [it] could be Stan Mikita.

Myers also explained that Mikita lighting up the Leafs when he was growing up went into the decision:

I wanted Stan Mikita’s Donuts to exist in real life so bad ... Mike Myers on what got him to put Mikita in Wayne’s World is pretty great #RIPStanMikita pic.twitter.com/f5zHRgXaIQ

Myers also explained how he thought Mikita symbolized Chicago hockey at the time that he was playing:

He does. When I played street hockey and I couldn’t be on the Leafs, because we’d all have to be a certain player… When I was a Leaf, I was Dave Keon. When I was a Blackhawk, I was Stan Mikita. And if I had to go in net, which I often did because I’m the youngest of three, I was Tony Esposito if I had to be the Blackhawks, or Bruce Gamble and Jacques Plante if I was the Maple Leafs. Just a dream come true to have Stan Mikita be part of it, part of my life. And that he was from Slovakia, or to that point Czechoslovakia, was exotic. And he wore a helmet early. He just looked like a hockey player, you know what I mean? Just an awesome, awesome hockey player.

Everyone will always remember Mikita for what he accomplished on the ice, for his fictional donut shop off the ice, and for being just an incredible human being.

"Stan Mikita will be always remembered as a champion, an innovator and a master of the game. He embodied the Chicago Blackhawks." #ForeverABlackhawk pic.twitter.com/K2fLgNHf4z