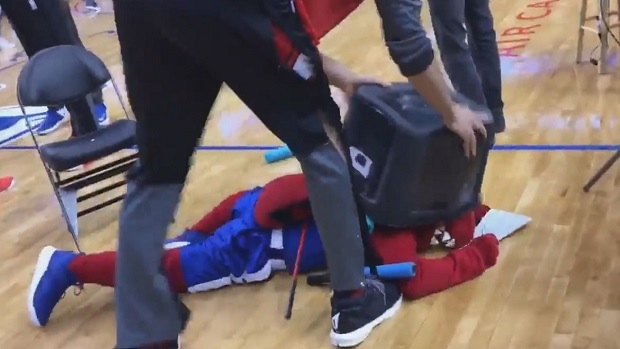 Every mascot around the NBA knows how much Robin Lopez dislikes them.

Over the years, Lopez has gone from building to building in the NBA making the mascot’s night harder than it needs to be. Lopez usually tends to disagree with the mascot’s gimmicks and shows his displeasure by taking it out on them in a physical way.

On Tuesday night, Lopez and the Chicago Bulls were in Toronto for a match against the Raptors, and if there’s one mascot in particular who has made his way up Lopez’s bad list, it’s The Raptor.

#RobinLopez went OFF on the Raptor.

We don’t know how it all started, but Lopez has not been The Raptor’s biggest fan since moving over to the Eastern Conference a couple of years ago.

I figured being a good host was the right thing to do...#mightwanttorethinkthat #stillalittlesore @Raptors @rolopez42

As for The Raptor, he shouldn’t take it too personally, since Lopez gives every mascot a tough time when he visits their city.