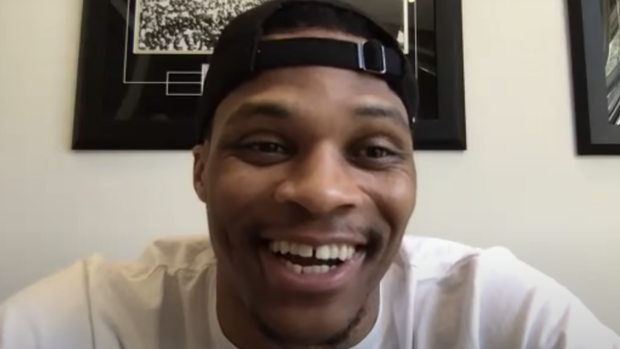 You would think a 10-year-old basketball fan's biggest dream would be to meet their NBA idol. Well, not for young Westbrook - he had ball on the brain.

On Tuesday, Jimmy Fallon was joined by Russell Westbrook on The Tonight Show (At Home) over a video call where they discussed Westbrook's binge of the latest Netflix Originals sports documentary miniseries 'The Last Dance' and he revealed a hilarious story about when he chose hoops over a Michael Jordan autograph.

Westbrook attended Michael Jordan camp when he was about 10 or 11-years-old. On the last day of camp, everyone got to bring something for Jordan to sign and take a picture with. When it was time for Westbrook to get in line for his turn, he was in the middle of a pick-up game and told his coach not to worry, he was okay right now, and continued playing his basketball game.

Maybe he thought he could go later? Or that they would circle back around to him? Who knows what was going through his mind at the time, but what we do know is that Westbrook never got a picture or an autograph which he later came to regret, big time.

I guess that's what happens when ball is life.