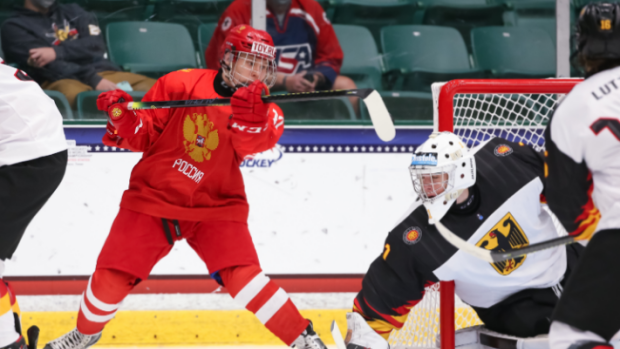 It’s always impressive when a player is able to score not one, not two, but three goals to complete the hat trick. It’s so impressive that fans are willing to sacrifice their hats in order to celebrate the achievement.

Even by hat trick standards, Matvei Michkov’s latest hat trick is another level of impressive. Playing against Germany in the U-18 Worlds, the skilled Russian scored a lacrosse-style goal, another goal that he knocked home from a ridiculous angle, and a between the legs goal off a rebound.

We honestly don’t know which goal was the nicest.

🇷🇺 Of course it's Matvei Michkov! The #2023NHLDraft eligible is just nuts, the confidence to try, the precision to finish. Just WOW.https://t.co/IrFisl0sEe pic.twitter.com/Z93pDCRHY5

🇷🇺 Matvei Michkov (#2023NHLDraft) strikes for the second time! Waits out the German goalie and fires it in off the post. He is 16 years old.https://t.co/IrFisl0sEe pic.twitter.com/UW882uZBmv

Between the legs off a rebound:

He also scored a fourth goal in Russia’s 6-1 victory over the Germans, but it was a little less highlight reel than the rest.

🚨 It's Michkov's world and we're just living in it.

What a night for the young sniper. You can bet scouts have their eyes on this tournament, and they’re likely still picking their jaws up off the floor like the rest of us.