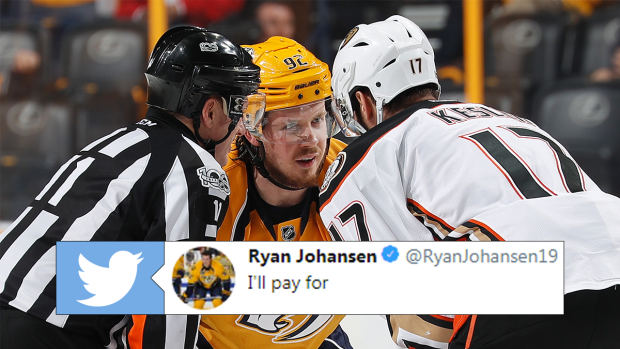 Earlier on Sunday night, Ryan Kesler made some waves with a sudden jab out of the blue at Ryan Johansen on Twitter. The two have a pre-existing rivalry, and Ryan Kesler is Ryan Kesler, so, you know, there’s never a better time than the present to reignite the war of words.

Ryan Kesler sending shots at Ryan Johansen, will he ever chill? 😂😂😂

It didn’t take long for Johansen to respond. Just under three hours after Kesler’s initial tweet, Johansen posted this.

I'll pay for your parking

Johansen doesn’t actually include Kesler’s handle, but, like, you know what this is about. Or maybe he just wants to pay for everyone's parking? (Honestly, maybe a more pressing topic is how underwhelming this reply is, but we’ll leave that to you guys to figure out.)

So, will Kesler fire back with another Tweet, orrrr, like... Are they taking it to the streets?

That was a horrible comeback

I hope you destroy him this season. 😂 @Ryan_Kesler is trash.