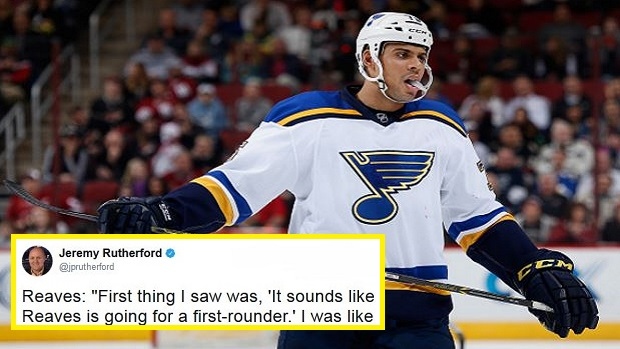 Plenty of trades have taken place throughout the NHL over the past 48 hours with some big names changing teams as teams look ahead to the future.

One of the trades that took place during the first round of the 2017 NHL Draft was between the Pittsburgh Penguins and the St. Louis Blues as the defending Stanley Cup champions acquired Ryan Reaves and a second-round pick in this year’s draft in exchange for Oskar Sundqvist and a 2017 first-round pick.

There wasn’t much attention surrounding Reaves heading into the offseason, so when he found out he had just been dealt to the Penguins in exchange for a first-round pick he thought for sure it was a false report because of what the Penguins were giving up to get him.

Reaves: "First thing I saw was, 'It sounds like Reaves is going for a first-rounder.' I was like 'OK, obviously that's a bunch of garbage.'"

Penguins general manager Jim Rutherford made it clear he wanted to add some size this offseason and that’s exactly what he did.

Known more for his physical play on the ice, the 30-year-old Winnipeg, Manitoba native finished with a career-high 7 goals and 13 points in 80 games last year and finished with a whopping 104 penalty minutes.

Considering Reaves was selected 156th overall in the 2005 NHL Entry Draft, it’s pretty impressive that Doug Armstrong was able to get a first-round pick in return for his enforcer.