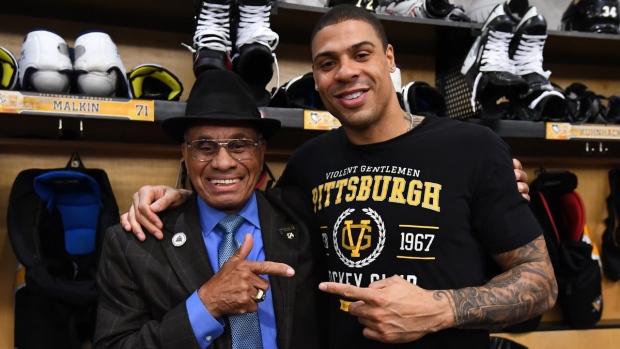 On Thursday morning, Ryan Reaves got to meet Willie O’Ree, the first black player to ever play in the NHL that broke the colour barrier back in the 1958 with the Boston Bruins and carved the path for players like Reaves to pursue the sport.

The NHL Diversity Ambassador was on hand in Pittsburgh educating and speaking out about the special Hockey Is For Everyone month of February.

It was an honor to have you at morning skate, Willie O'Ree!

Coach Sullivan: “Willie is a testament to perseverance. He might have faced more adversity than any of us. I think he’s a great example of dedication. He’s been a great ambassador to the sport.”#HockeyIsForEveryone pic.twitter.com/v1b63RgPD8

According to Penguins TV host Celina Pompeani, Reaves told O’Ree that he was going to score a goal for him in their game against the Los Angeles Kings on Thursday night prior to puck drop. O'Ree confirms in the video below that Reaves did in fact tell him he was going to Gino, despite Reaves playing it down later on.

Reaves on his goal: "With Willie O'Ree in the house, it was pretty special. He's a pioneer for players like me and it was nice getting him one."

And wouldn’t you know it. Reaves tallied his fourth goal of the season to open up the scoring for the Pens.

GOAL! REAVES! He makes the Kings pay on the turnover. The #Pens lead 1-0 with 13:54 left in the 2nd period. pic.twitter.com/xqBrlbUpyD

After the game, Reeves was all smiles, but didn’t admit to guaranteeing the goal, instead opting for a more cordial approach.

Reaves on scoring for O'Ree: "First of all, I don’t promise goals, I cannot promise goals. I don’t know if you’ve seen my scoring touch. I said I was going to have a good game for him and hopefully get him one and I did." -SK

Reaves was humbled meeting the man that made such an impact on allowing coloured players in the NHL. Reeves expressed his gratitude for all of O’Ree’s endeavors over the years.

"I meet a lot of not only the black players, but the players of color that are in the league," O'Ree told Pens Inside Scoop.

"The first thing they say is 'Mr. O'Ree, I can't imagine what you had to go through to make it possible for a player like myself to play in the league,' and that means a lot. It's very sincere, and it just gives me a good feeling that I played a part in them coming into the National Hockey League."

Reaves and the Penguins went on to defeat the Kings 3-1.