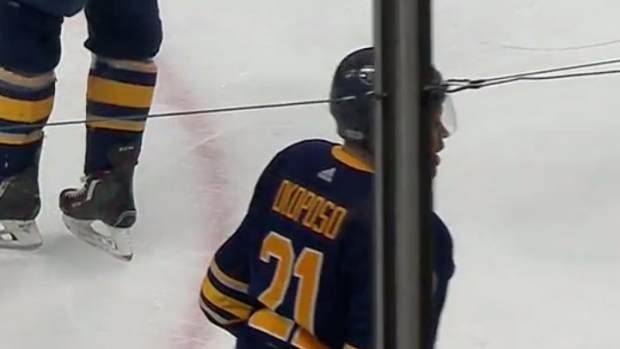 The Buffalo Sabres forgot to bring defensive structure to their 6-2 loss versus the New Jersey Devils on a Monday afternoon tilt at home.

They also forgot to spellcheck the nameplate on the back on Kyle Okposo’s jersey.

The 28-year-old played parts of the first with the extra vowel on his nameplate before receiving a new jersey with his name spelt properly. There’s not supposed to be an extra “O” following the the “K” in Okposo.

Kyle Okposo is getting his jersey changed on the bench because his last name was misspelled. Oops.

Not to be confused with the Ogopogo monster, the St. Paul, Minn. product is pointless in his first three games of the season and has -6 rating.

This isn’t the first time the Sabres misspelt a name on the back of one of their jerseys. Back in July during the team’s development camp, goaltending prospect Jonas Johansson had his name as “Johanosson.”

Usually at least one player in development camp has messed-up jersey. This year's Sabres winner is Jonas Johansson. pic.twitter.com/DyFQ4w73tP

Okposo signed a seven-year, $42-million contract two summers ago, so it’s not like he was immediately brought in. You think they’d have his name down pat by now, or someone would notice that one of their marquee players had his jersey spelt incorrectly.