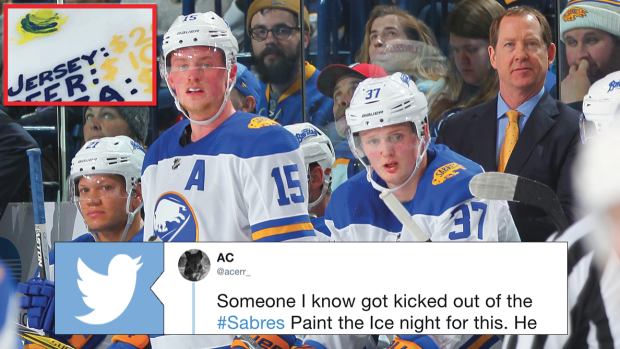 For the 7th-straight season, the Buffalo Sabres won't be participating in the playoffs.

The Sabres won just 25 games this season, their lowest total since the 2014/15 season and their lack of on-ice success this season frustrated both the players and the fans.

Speaking of the fans, one Sabres supporter decided to make his frustrations with the team very clear by painting this message on the ice during the team's 'Paint The Ice' night.

Someone I know got kicked out of the #Sabres Paint the Ice night for this. He was told he couldn’t tweet it out either. 🤣🤣🤣 pic.twitter.com/ABMxV1E1Xa

Good thing he didn’t say I wasn’t allowed to retweet it!! 😂😂 https://t.co/xYSFGnT3Xt

There are reasons for fans to be encouraged that things will turn around, though, and it starts with Jack Eichel, who had this to say when he and his teammates cleaned out their lockers.

Eichel: “I’m invested in this city and this organization. I’m here for a while. Things will get better and it starts with me.” pic.twitter.com/oO3U77W7tn

Eichel is committed to winning in Buffalo and we hope he and his teammates do turn things around for themselves, the fans and the city.

Thanks to our season ticket holders and @PPGPaints for helping out with our first “Paint The Ice!” pic.twitter.com/d3CSkuGQy1